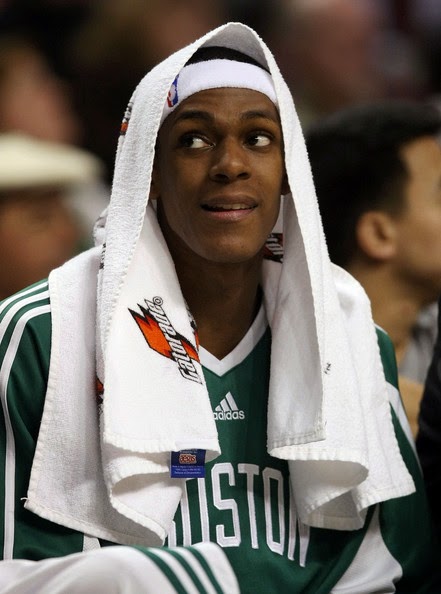 Celtics captain Rajon Rondo has underwent surgery to repair a broken left hand. According to ESPNBoston.com, the guard informed the team he had slipped in the shower Thursday night. He will reportedly miss 6-8 weeks including the start of the season.

The C's announced that on Friday morning Rondo had a successful surgical procedure done to repair a left metacarpal fracture at New England Baptist Hospital after suffering the injury at his home last night.

With training camp just a few days away, Brad Stevens will have to choose between first-round draft choice Marcus Smart and second-year guard Phil Pressey, who had 11 starts last season to run the point.

This injury is just the latest news surrounding Rondo in what has been a week of questions about his future with the team. Last Sunday Celtics owner Wyc Grousbeck called his all-star 'super stubborn' and questioned how coachable he is.

"It's my goal to keep Rondo here," said Grousbeck. "I think we all want that." [CSNNE.com]

Even Danny Ainge to some extent believes Rondo will be here beyond season.

"Yes, we expect Rajon to be in Boston for the long term," Ainge said. "Does that need to be asked by anybody ever again?" [CSNNE.com]

Rondo was poised for a healthy return on Monday, but he will miss his second straight training camp. In the last two seasons, the guard has only played in 68 games from the result of a torn ACL in January of 2013. But most believed he was set to have the best season of his career. Now that will have to be put on hold until further notice.

In the meantime let's talk some more about how Rondo is in the last year of his current contract and how he is set to become a free agent next summer. I sure can't get enough of that.