Celtics have 18 players under contract 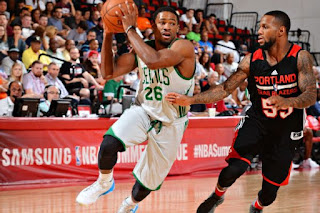 After completing two draft-and-stash deals for first round picks Guerschon Yabusele and Ante Zicic and officially signing second round picks Demetrius Jackson and Ben Bentil, the Celtics have 18 players under contract as they head towards training camp.

No. 3 overall pick Jaylen Brown also inked a deal -- terms of the contract were not disclosed but Brown is expected to potentially crack Celtics coach Brad Stevens' rotation next year and isn't expected to be 'on the bubble' before the start of the regular season. The Celtics' top pick averaged 16 points, 6.2 rebounds and 2.3 assists in last month's summer league play.

Jackson, who was projected to be a late first-round pick, has the potential to become a good ball distributor in NBA. In summer league, he proved to be a pass-first point guard with scoring capabilities and was a steal for the Celtics who took him at No. 45 in the second round. He averaged 5.2 points and 1.2 assists in 16.6 minutes of summer league.

Averaging 8.7 points and 4.3 rebounds per game in the Utah summer league, Bentil's playing time decreased after his shooting took a dip in the Las Vegas league. He was 1-for-10 from the floor in Vegas and went from 15.4 minutes a game to 7.5 but showed his versatility as a scorer who can play more than one position.

Tyler Zeller's contract extension also adds depth to the frontcourt, as well as the free agent signing of Gerald Green.

Both Jackson and Bentil will be one of five players, including James Young, R.J. Hunter, and John Holland, fighting for the last three roster spots.

The Celtics now have 18 players under contract and barring any trades or signings, they will have to trim their roster down to 15 by the start of the regular season.