Ray Allen has contacted Celtics About a Potential Comeback 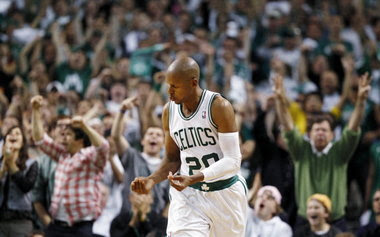 Former Celtics shooting star Ray Allen has been in contact with team officials about making a potential comeback in Boston.

In an interview with the Hartford Courant, Allen says he's spoken with two of his former teams about making a possible return -- the Celtics -- where he won his first NBA championship -- and the Bucks -- the team that drafted him back in 1996.


"I would love going back to those places if it worked out," Allen said, "because both teams are good, too. It doesn't necessarily have to be championship-or-bust for me to go back to the NBA.

"I want to be in a situation where I thought I could help, play a little bit and help where they have good young talent."

Allen, who was a member of the Celtics' new 'Big 3' alongside Paul Pierce and Kevin Garnett, helped lead the team to an NBA championship in 2008. He last played for the Celtics in 2012 before he turned down a two-year contract to stay in Boston and signed with the rival Miami Heat for less money -- a move that some C's fans deemed as unforgivable at the time.

Allen went on to win his second NBA title with the Heat in 2013 before losing to the Spurs in the finals the following year -- which ended up being his last season in the NBA.

"I could not have learned all that I've learned in 20 years of my life, dealing with coach [Jim] Calhoun, and how to sleep right, eat right, and then go to the NBA and do what I've done there and then afterwards just drop the ball and let everything go. I still weigh the same I weighed in college."

He expects to make a decision by the start of training camp.


"At the start of the year, if nothing pans out, then basically I'll retire," Allen said.

Allen, who's a 40 percent career shooter -- shot 37.5 percent from deep in his last season with the Heat.

After finishing with the third-worst 3-point shooting in the league, the Celtics are in dire need of an outside shooter, and there isn't another player in NBA history who's made more 3-pointers than Allen. He's holds the all-time regular season (2,973) and playoff (385) record for most 3-pointers made.

The C's currently have 18 players under contract but can sign up to 20 players before the regular season -- where they have to trim the roster down to 15.