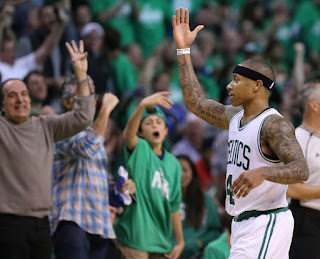 After only appearing in only nine national broadcasts throughout the past three season, the Celtics are slated for 22 national TV appearances -- including an NBA Christmas Day matchup against the Knicks at Madison Square Garden.


The Celtics will open its 2016-17 season on Oct. 26 at TD Garden against the Brooklyn Nets. With the off-season signing of Al Horford, the Celtics are projected to compete in the upper echelon of the Eastern Conference next season, thus, are scheduled to play 10 games on ESPN, nine on TNT and three on ABC this season.

This season also marks the first time in four years that the Celtics will be playing on Christmas -- a day where the league's top-notched teams are on annually on display. They will kick-off the five-game slate at noon ET.

The C's will also get their first crack at the NBA champion Cleveland Cavaliers in the first week of the season on Nov. 3 and face the Western Conference Champion Golden State Warriors on Nov. 18.


Here is the full schedule