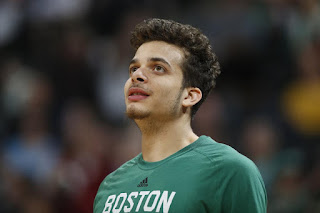 We've seen Hunter's outside shot look very promising in exhibition and summer league games, but we've yet to see him put it together on a consistent level during the regular season.

The Celtics have been in dire need of a knockdown 3-point shooter since the departure four years ago of Ray Allen --  a player who opponents constantly had to cover at the arc. Last season the Celtics finished with the second-worst 3-point shooting in the league (33 percent, better than only the Lakers). Hunter's outside touch certainly could help boost them into the upper echelon of the Eastern Conference, but he's going to have to earn a spot in Brad Stevens' rotation first.

Hunter, 22, played in 36 regular-season games last year, shooting 30 percent from behind the arc in only 8.8 minutes a night. In a crowded backcourt, it was hard for Stevens to find playing time for his rookie -- who was behind Isaiah Thomas, Avery Bradley, Marcus Smart and Evan Turner on the depth chart. But with Turner out of the picture (now playing for the Trail Blazers), his minutes will be up for grabs.

Hunter, coming off being a star in college at Georgia State, said last season's transition to the pro game matured him.


"I've always played, so I had to kind of see the game from another angle," Hunter told the Atlanta Journal-Constitution. "I have a better appreciation for team ball, for winning and for just being on the court. I remember at the end I just wanted to be on the court to be a part of a win. It was humbling."

In the playoffs, Stevens turned to Hunter for offense after losing Bradley (hamstring) at the end of Game 1 -- and eventually the entire series -- and Hunter responded with abysmal performances. He shot 22 percent from the floor, including 20 percent from deep, and averaged a single point in 8.4 minutes. Making matters worse, Hunter couldn't keep up with the Hawks on defense -- he was late closing out on Kent Bazemore and caught behind screens in trying to cover Kyle Korver.

For a rookie who hadn't cracked Stevens' rotation all season long, it's easy to see how Hunter could fall under pressure in the postseason. However, as he heads towards his second year in the leauge with a taste of playoff basketball in him, it may instill confidence in the young guard.

As a 3-point threat, Hunter could open up lanes for guys like Thomas and Smart. Opponents would be forced to close out on his shot, which would allow the C's to spread the floor and improve the Celtics' offense.

In summer league play last month, Hunter was impressive from outside -- reassuring his potential in becoming a go-to shooter for the Celtics' second unit. In five games, Hunter hit 11-of-24 3-pointers (45 percent). His best performance of the summer was against one of the league's better young shooters, as he held his own against Suns guard Devin Booker. In a shooters' duel, Hunter shot 4-of-6 from deep and finished with 17 points, while Booker knocked down 3-of-5 from behind the arc and finished with 24 points.

Although he may be one of the team's better backcourt shooters, Hunter is going to need to outshine his teammates before the start of the season. His 3-point shot is what separates himself from guys like Terry Rozier, James Young, and Demetrius Jackson -- players who will be fighting for roster spots this fall.

After Thomas and Bradley, he's the team's most efficient backcourt 3-point shooter, and if he's able to shoot at a high rate this season it would give Stevens a weapon he's never with the Celtics.