What Allen's 'possible' comeback is really about 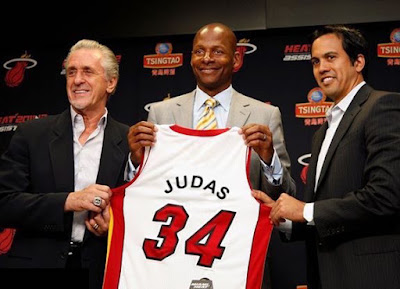 It's been said when it comes to matters of the heart; "Time heals all wounds," or at least that's what I was once told. The jury still might be out on that one if you ask me about former Celtic Ray Allen.

The 3-point king has been in the headlines throughout the basketball world the last couple days about possibly lacing them up and making a comeback after a two-year hiatus.

Apparently Judas, I mean Allen, has been in contact with the Milwaukee Bucks, where he began his NBA career 22 years ago, and the Boston Celtics, where he helped raise a 17th banner and won his first championship ring.

Now, at age 41 and two years away from the game, most basketball fans are still speculating where he may end up since he hasn't officially retired yet.

The last chapter of Walter Ray [his real name for those that didn't know] ended after he decided to take his talents to South Beach in order to help the Heat win what turned out to be their last title during the LeBron era [including a hit a game-tying 3-ball in Game 6 that forced OT], beating the San Antonio Spurs in seven games.

The following season Allen, Bron-Bron and the Heat fell 4-1 in a Finals rematch in what will now be known as Tim Duncan's fifth and final championship.

Now since Steph Curry, the two-time reigning MVP, has had two-years to enjoy a championship, along with being the face of the league and arguably be the best shooter actively playing at the moment, Walter Ray wants to come out of his semi-retirement and 'help' a team [not necessarily a title contender] out?

Oh man, where do I begin?

It seems to me that the Celtics fans are almost split 50/50 on this current topic [maybe 60/40 give or take], preferring Danny Ainge not to sign Allen.

If you ask me, the Celtics should not bring back the veteran formerly known around Boston as Jesus Shuttlesworth. Not just because of the decision he made back in 2012 of turning down a two-year, $12 million [no trade clause] deal to remain in green in order to go play for the enemy at the time for less money, but because his ego has no place on this current C's roster.

That's right, Walter Ray can't stand to sit back and watch as Curry continues to get all the kudos while he climbs up the three-point latter. It kills Allen to know that he has stayed relatively healthy since June of 2014 and he has faded into the dark despite being the best shooter of all-time who's 2,973 career 3-pointers hold the NBA regular season record [385, most made in the playoffs], while Mr. MVP sits at 19th on the same list with 1,593 made [243 made in the postseason].

So why come back now? 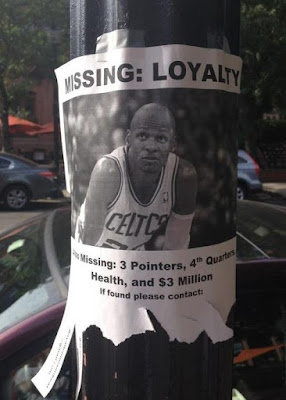 Don't be fooled with the notion that Allen is reportedly interested in wanting to return to Boston to help right a wrong.

If he were to wear green again, that helps his case for his number 20 to possibly be retired one day, after ending his career with the C's and walking into the Hall-of-Fame as a Celtic.

The same guy who bitched about losing his starting job to Avery Bradley. He's the same guy who complained about Rajon Rondo [you're dumb if you think he ran Allen out of town, by the way]. The same guy who wrote off Doc Rivers, Paul Pierce and Kevin Garnett hopes for one more championship run, doesn't deserve to just walk into the TD Garden in 2016 and get the same love he got in 2011 when he broke Reggie Miller's 3-point record just to stroke his ego.

That shipped sailed to the port of Miami.

Don't get me wrong, would the Celtics benefit from a career 40-percent 3-point shooter [46-percent overall] on their roster?

Of course, they would.

If there's anyone who can come back after being away from the NBA for over two years, while having kept in game shape and could still contribute, it's Walter Ray [the other would be Jordan, of course]. But his intentions are not to help young players, or even win at this point in my opinion. His comeback would be just to pad his 3-point stats and nothing else.

Ultimately if he does return, I feel like he'll let his local supporters down by not choosing the Celtics. He'll most likely choose the Bucks, or even the Cavaliers. Obviously this is the most publicity Allen has gotten in over three years and he's drinking it all up at the expense of those excited C's fans that would love to bust out their No. 20 jerseys again [if they haven't written traitor over his name].

Clearly, four years hasn't been enough time for this Celtics observer. I've only just now been able to re-watch one of my favorite basketball movies; 'He Got Game' as recent as about two months ago, for the first time since before 2012. I don't even like to mention his name...seriously ask those who know me best. 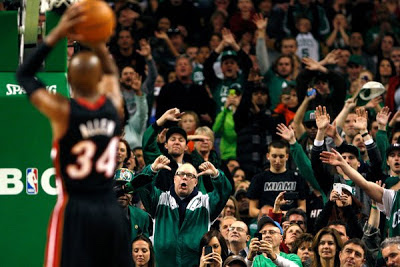 But ask me if I hate Walter Ray?

To be completely honest, I don't.

It takes a lot for me to 'hate' an athlete, but I haven't forgiven him for how he left and all he said to the media [he always loved talking to them, by the way]. But I also haven't forgotten what he did as a Celtic, which is why it still gets to me when I think about it.

He still has the prettiest shot I've ever seen. The quickest, smoothest release that I always thought was going in every time he flicked his wrists and let that ball fly.

There's a piece of me that gets angry when I hear this generation of basketball fans who only live in the moment, and even the older b-ball heads scream out "Steph Curry is the best shooter ever!"

This is coming from someone that had a hard time just typing his name throughout this article.

So the way I see it, let the egotistical Allen make his comeback to the Knicks or wherever he chooses, but not Boston. He shouldn't. Ainge literally and figuratively doesn't have any room for someone's head as big as Walter Ray's, even if he is the greatest shooter of all time.

To read the first piece I ever wrote for Causeway Street that ironically is about Allen signing with the Heat and my knee jerk reaction less than 36 hours after he was introduced in Miami, click here