Can Terry Rozier Build off of Last season's Playoff Opportunity? 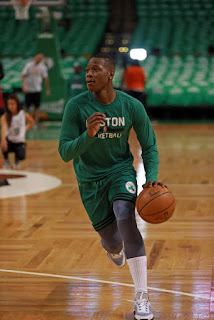 When Celtics coach Brad Stevens turned to Terry Rozier in his team's playoff series against the Hawks last April, the 6-foot-2 rookie did not disappoint.

After averaging only 8 minutes in 39 regular season games, Rozier made his presence felt in his first NBA playoff series -- averaging 4.8 points and 3.4 rebounds in 19.8 minutes.

He knocked down shots, did a stellar job on defense and most importantly -- became the facilitator who Stevens could rely on for valuable minutes.

However, past performances doesn't necessarily cement Rozier into the Celtics' 2016-17 rotation. His opportunity in the playoffs was due in large part to Avery Bradley (hamstring) having to sit out the entire series after the Celtics' Game 1 loss in Atlanta. But Rozier's skillset as a pure point guard will certainly increase his chances in becoming one of the Stevens' go-to guys off the bench next season.

In a sixth man role, Evan Turner emerged as the team's secondary facilitator for two years in Boston. As the secondary ball handler, Turner helped keep opposing teams at bay while the starters rested.

Now with Turner gone (now playing with the Trail Blazers), many expect Rozier to take on an increased role and he used the Celtics' Summer League platform to prove why he's ready to step up to the challenge. Rozier was the team's MVP this summer -- averaging 20 points, 5.3 rebounds and 3.5 assists.

As the floor general -- Rozier set up his teammates, led the team in scoring and forced turnovers on the opposite end. He also proved he can score at the rim and has an outside touch -- something the Celtics are always looking for off their bench.

As he heads into his sophomore season, Rozier believes he was always ready for the kind of opportunity  he received in the playoffs and has used this summer to work on becoming a smarter point guard.


"One of the things I said before training camp is that I'm smarter [now]," Rozier told Boston.com. "I felt like I could always play, but I just feel that my opportunity came late obviously in the playoffs [last season]. I got to see that as a rookie early and it made me smarter to just see things. Then, this summer I went over a lot of things and touched on things I could do as a point guard. I think I just became smarter more than anything."'

As Turner leaves behind an important role for this team, look for Rozier to continue to make a strong case for himself in training camp and in the preseason as a guard who's ready to become Isaiah Thomas' backup point guard. He has shown that he can read opposing defenses, get the ball to his teammates and his underrated quickness allows him to score at the rim.

Much like Avery Bradley and Marcus Smart, Rozier is a defensive-minded guard. He has a knack for suffocating his opponents in the backcourt and has the potential to blossom into a consistent scorer.


"I think that Terry Rozier has made a great case for himself for next year," Ainge told Boston.com. "He's been our best player from the first day of training camp, just didn't get a lot of opportunities because of our depth at guard. I think he's winning a spot [in the rotation]."