Boston- It was a sunny afternoon down on Causeway Street, a great day to avoid a 4-0 sweep from LeBron and the Cavaliers. Despite the 'over-achieving' aspect of the Celtics this season, no team wants to be eliminated from the playoffs without getting a win. Such was the case on Sunday, and there was still a fighting chance in every sense of the word. But in the end the hole was just too deep to climb out of as Cleveland took the C's best punch in the mouth and escaped with a 101-93 victory to advance to the Eastern Conference semi-finals

James led the Cavaliers with 27 points, 10 rebounds and 8 assists playing all but 2-minutes of Game 4. He didn't shoot the ball particularly well, going 10-of-24 from the field (1-of-7 from 3), but he made all the big plays when they counted most. Kyrie Irving bounced back from a 13-point performance in Game 3, to finish with 24 points on 8-of-19 shooting while grabbing 11 rebounds. Iman Shumbert added 15 points in his best game of the series to go along with 11 rebounds and Timofey Mozgov also recorded a double-double with 12 points and 11 rebounds in the Cavs' win.

But the big story of the day would be the fact that Cleveland would lose not one but two starters early on.

Kevin Love midway through the first quarter ran to the locker room grabbing his left shoulder after fighting for a rebound with Kelly Olynyk. The Celtics' forward was called for the foul, but the damage had already been done, as both players were tangled up and Olynyk's right arm yanked Love's left arm causes his shoulder to pop out of place. Initial reports would say Love suffered a dislocated left shoulder, and he did not return. No word how much time the Cavaliers forward will miss.

Love called the play 'bush-league' as he believes Olynyk had all the intentions to cause an injury. Brad Stevens would later disagree saying that deliberately hurting a player is not in his forward's nature.

The lost of Love would clearly affect the Cavaliers offense the rest of the way, and it turned out to not be the only 'incident' of the afternoon.

Former Celtics fan favorite Kendrick Perkins (who only played 4 minutes) checked into the game with less than two-minutes to end the first-half what seemed like only to cause a ruckus. On one of his trademark illegal screens, he sent C's swingman Jae Crowder to the floor, and the two players had to be separated when Crowder got to his feet and big Perk took a swipe at Crowder's face. Upon further review the refs assigned each with a technical foul and Perkins was giving a flagrant-1 call for the push, but neither were tossed for the altercation. 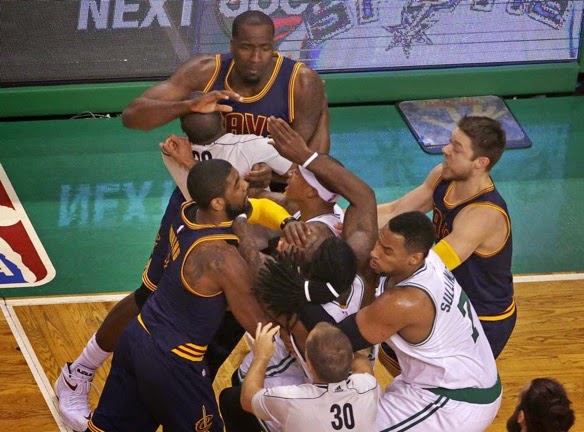 Crowder all fired-up for being T-up would go on to miss both-free throws as the Cavs were up 51-32 at that point.

At the 10:24 mark in the third quarter, on a missed Avery Bradley jumper that J.R. Smith was in position to box out Jae Crowder for a rebound, the Cavs guard swung his elbow backwards to Crowder's face forcing the Celtics forward to fall to the floor and sprain his left knee. Smith was thrown out of the game on a flagrant-2 foul call, as Crowder (7 points, 3 rebounds, 17 minutes) was carried to the locker room and didn't return.

Smith faces a possible suspension by the league on a play, similar to the one in the very same building two-years to the day, when the Celtics faced the New York Knicks in the first-round. Smith elbowed Jason Terry and was out for the following game.

"Things got a little chippy," Irving said. "Game 4 was the most physical game I have ever played in."

Isaiah Thomas, who was experiencing his first taste of the NBA playoffs, believed that it's all a part of the game, especially in the postseason.

"We are all men here. We don't need to cry." Thomas said. "It's playoff basketball. You need to move forward."

Thomas finished with 21 points (4-of-17 shooting) and 9 assists, while Jared Sullinger also scored 21 points and grabbed 11 rebounds off the bench. Avery Bradley added 16 points and Marcus Smart, who was late for shoot around and did not start, chipped in with 11-points to go along with his 6 rebounds in the Celtics last game of the season.

Boston still trailed 57-36 after Crowder, who started in place of Smart, was carried off the floor by teammates. It was the biggest lead of the series for the Cavs at that point. But despite both teams not shooting well, the Celtics outscored Cleveland 25-13 to finish the third quarter and cut the deficit to 70-61 going into the final frame. Following the ejection of Smith Cleveland went on to go 4-for-20 from the field. 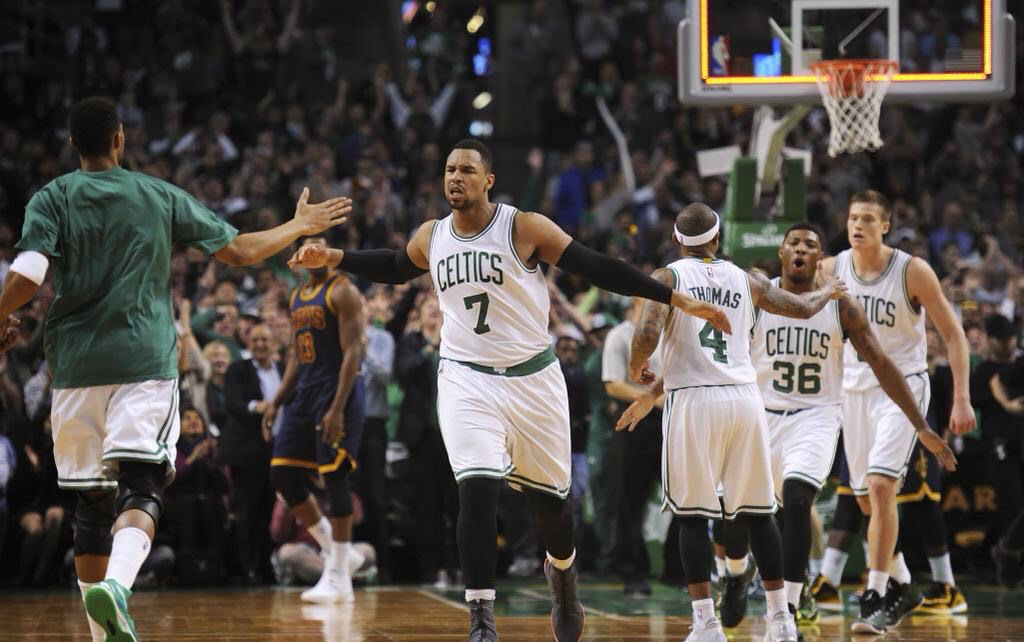 In the fourth, the Celtics continued to get to the free-throw line stopping the clock to give themselves a chance to chip away at Cleveland's lead but with 44-seconds left in the game the Cavs were up 99-89.

After a Thomas lay-up, he grabbed James on the inbound pass while out-of-bounce and no call was made, leading the Celtics to steal the ball and Bradley was fouled on a jumper. He made both free-throws to cut the lead 99-93.

As LeBron was inbounded the ball once again, Kyrie fumbled the pass out-of-bounce which set up a Celtics timeout. A three-point play was drawn out for Gigi Datome, who missed the 3-point attempt and Irving grabbed the rebound as he was fouled. The Cavs guard sank both freebies and sent his team to the second round of the playoffs for the first time since 2010.

"We have some vets but we're a young team together," James said afterwards. "The Celtics gave us the test that we needed."

The Celtics fought hard until the end, but in this postseason it was simply not meant to be. Though the last three-games were only lost by eight-points each, it was not how Stevens wanted to end the season. Despite some of his questionable decisions at times in this four-game series, it comes along with the lack of experience in these NBA playoffs that he and his players will learn from going forward. The mighty Cavs were not un-beatable, but the margin of error was so tiny for the C's, that almost everything had to go right in order for them to have a chance.

What can we take away from this first round match up?

For one, turnovers and rebounding played a huge role in all four losses. Just in Game 4 the Celtics were out-rebounded 50-45. The Cavs grabbed 10 offense boards, while the C's grabbed 11 offensive rebounds. Though more active on the glass on Sunday, the Celtics committed 14 turnovers that led to 15 points for Cleveland (9 steals).

Another factor that played a role in the lost for the Celtics on Sunday was poor shooting all around. Neither team shot well (C's 38.8 percent to the Cavs 39.7 percent), but the C's only connected on 3 made 3-pointers on 23 attempts (Cleveland went 7-of-33). Plus Boston went 24-of-37 from the charity line. Besides Isaiah Thomas making a perfect 12-of-12 free-throws, no one else made more than three for the game.

The Celtics were constantly playing from behind all series, especially in the second half. In a game of runs, the Cavs always put one together when the C's would strike. That's not an easy thing to always do in a series, it wears you down, and then Brad Stevens threw everything to the wall to see what stuck, and in the end it wasn't enough to get a win.

After a 40-42 regular season record, a 15-win improvement from a year-ago, the future looks bright. If you couldn't tell from your TV screens, those were "Let's go Celtics" chants that echoed throughout the TD Garden arena as a sold-out crowd were on their feet in the last seconds of Game 4. They gave their Celtics a standing ovation in hopes of better things to come this offseason.

"The crowd gave us a chance," said Stevens. "The crowd was fantastic. It's something you want to be a part of..That crowd was as good as it gets."