A Celtics Fan Viewing-Guide to the Final Four 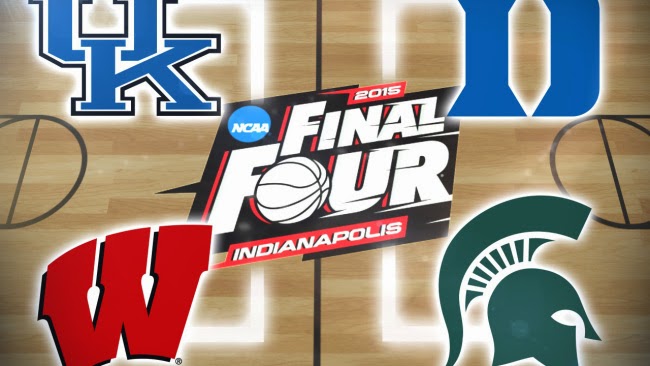 While the Celtics are in the midst of a playoff run (Some really great stuff on here about that, check out the latest podcast), it’s never too early to take a look at some draft prospects and some potential future Celtics while enjoying this weekend. This year’s final four contains 3 teams with multiple potential first round picks, so there is a ton of talent coming on Saturday night and Monday night.

First let’s take a look at what the Celtics have in the upcoming draft. The C's have their own pick (ranging from 10-16 depending on playoff push), The Clippers first rounder (mid 20s), Philadelphia’s 2nd round pick (probably the 32nd pick), and the Celtics own second rounder (40s). Danny Ainge will probably trade one of these, but that’s impossible to predict this far out.

Let’s get to the Games:


Could be taken with the Clippers pick, Tyus Jones is sure handed point guard for Duke. He is an above average shooter, can make plays, and can lead an offense effictevly. The real problem with Jones is that he doesn’t do anything at an elite level, and doesn’t have the body or athleticism to be a significant difference maker on the defensive end. While I don’t see too much room for him on the Celtics with Isaiah Thomas and Marcus Smart as point guards, but he may be one of the more talented players on the board at that point, so don’t rule anything out.


I am a lot higher on him than most, but I think Valentine could be a steal for a second rounder. Tom Izzo, Michigan States head coach, is one of the best coaches in the country and best teachers of the game. Valentine is a tough, well built 6’5 guard/swingman who can knock down the three and play good, tough defense. In today’s NBA, and especially Brad Steven’s system, perimeter shooting and spreading the floor is extremely important. His 3pt shooting percentage has risen every year in college, and he shot 41% form three this year, a very good rate. Keep an eye in him for a potential sleeper pick.


Frank is a highly skilled 7 footer on the offensive side of the ball who can just about do it all. He shoots at a high rate from 3, can post up down low, and can do everything in between. The questions for him stem on the defensive side of the ball. His athleticism, strength, and defensive ability are all in question at the NBA level. He actually reminds me a little of Kelly Olynyk, in that they have similar questions coming into the draft. I’m not sure how he fits into the Celtics needs, but if he is available with the Celtic first pick, he will be one of the more Skilled players available.


Dekker saw his draft stock shoot up after virtually carrying the Badgers to the final four in a win over Arizona. Dekker is another highly skilled offensive player, but his main question is his shooting ability. Throughout the season, Dekker had struggled with consistency with his 3pt shot, shooting at a 31% clip. However, this past two games Dekker has been on fire from the three point line, virtually not missing versus Arizona. He has incredible ball handling for his size, and creates well of the dribble. Defensively he is not elite, but he puts in good effort and has good size and strength for his position. He could be a very lucrative option if the Celtics end up getting a playoff spot and landing a pick around the 15 or 16 range.


Booker has one of the most pure shots you will see at any level, and can put up points in bunches. Playing at Kentucky, he often times gets over shadowed by all the talent there, but make no mistake about it, this guy can play. He has decent driving ability and athleticism to complement his shooting, and could be the perfect floor spacer for the Celtics. His ceiling is a Klay Thompson like game, but his defense will most likely never get to where Thompson’s is now. Regardless he is a very good prospect Celtics fans should keep an eye on.


Lyles is a finesse power forward with a very good ability to score the basketball. Playing at Kentucky, it’s hard for him to consistently be a go to scorer with all the talent around him, but he definitely shows much promise on the offensive end. While he isn’t a 3pt threat yet, he can hit the midrange shot, and is very skilled on the post. His defense still has work, but with a 7’3 wingspan, he has the tools to be a good defender. Lyles needs to add some strength to his frame, and isn’t an overly impressive athlete; however his offensive skill is undeniable. While I don’t see a perfect fit in Boston, fans should still keep an eye on this talented freshman.

There are four players I have omitted from these games because I think they will be taken before the Celtics get to pick. Jahlil Okafor (Duke) and Karl Anthony Towns (Kentucky) are two highly skilled big men that are battling for the 1st overall selection in the draft, so unless a miracle happens in the lottery the C's won’t be getting them. Justise Winslow of Duke has been a favorite of mine all year, but his recent play has catapulted his draft stock into the top-seven.

One guy I would keep an eye on though as a Celtic fan is Willy Cauley-Stein, a seven-foot center for Kentucky. This guy is just an absolute beast on the defensive end, a guy who can protect the rim with his size or even guard the perimeter with his athleticism. He is exactly what the C's need to protect the rim and anchor their defense, but I would imagine he is a top ten pick in the draft. I can see Ainge falling in love with him and trying to trade up to draft him however, so he definitely should be watched.

Enjoy watching the games, and keep an eye out for some potential future Celtic!