What The Celtics Should Do For 'Love' 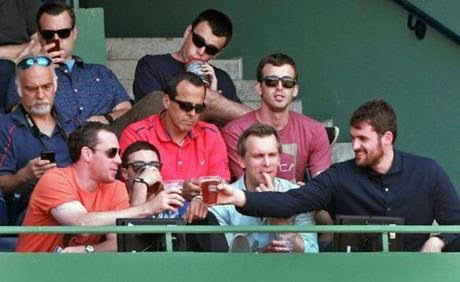 With a rematch of last year’s NBA Finals set to take place 24 hours from now, it seems like ‘Love’ is in the air for Celtics Fans. No, it has little to do with the Spurs per say, and it definitely has nothing to do with the hated Heat. It's all about Minnesota Timberwolves’ Kevin Love, who happened to be in Boston this past weekend to “check out the city and see what it’s like.”

It may have been a simple short vacation for some, but for most it seemed more like a business trip, with good intentions for the 25-year-old all-star. One could say it may result in a potential deal for the Celtics to acquire the forward in the upcoming weeks. With the C’s having the sixth and 17th pick in the draft, 19-days from now (June 26th), and the fact that Love has made us aware he is very much open to playing in Beantown, how does Danny get this done?

For starters if Kevin were to remain in Minnesota, he has made it clear he plans to opt-out of his current deal, which means he becomes a free agent in the summer of 2015. Flip Saunders could see his best player walk out the door with nothing in return. The Celtics clearly have the best assets (draft picks and young talent) to offer in a possible deal than any other suitors in the league, including the likes of the Lakers, Warriors, Bulls or the Suns. So what would Ainge give in return that would be considered ‘enough’ to make this official? 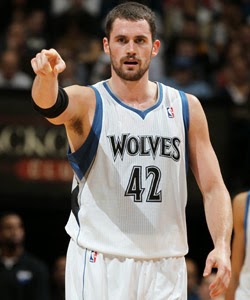 The Celtics have as many as 10 first-round draft picks for the next five years, cheap talented players still on their rookie contracts such as Kelly Olynyk and Jared Sullinger. Then they have non-guaranteed contracts to offer such as the forgotten Keith Bogans ($5 million), Phil Pressey, Chris Johnson, and Chris Babb. They can make the numbers work, as Love is set to make $14.6 million this year and $15.7 million next season. Seeing as he probably won’t sign an extension if a trade were to go down due to the new collective bargaining agreement, it would be in his best interest to wait until his contract ran out to get max money. His agent Jeff Schwartz (Also Paul Pierce’s representative), knows Boston is the team that can offer the most money to his client come July of 2015. So is a player of his caliber worth the risk?

All signs point to yes, a lot can happen in nine months to convince Love to stay for the long term. Kevin Garnett was six years older (31) when he landed in green; a four to five year window that was extended. While K.L., who arguably is the best power forward in the game (can shot inside & out, rebound, pass) and is a double-double machine, who has twice the years to offer. A trade of this magnitude will only attract other stars such as Carmelo Anthony, or other key free agents come next summer to challenge the boys down in South Beach in such a weak conference.

While Kevin Love was meeting and hanging out with New England Patriot players at the Greatest Bar (located across the street from the TD Garden right on Causeway Street), or hitting up Fenway Park to watch the World Series Champion Red Sox beat Tampa Bay, he never once tried to fly under the radar or even keep a low profile. Images of him with Boston fans could be found all over social media. Love seemed like a pretty approachable guy as he walked around the city with a big smile. He ate a meal at the famous Cask and Flagon (voted by ESPN, as the best baseball bar in the country), right on the outside patio where anyone could see and snap pictures with him. The ‘Love’ seemed pretty genuine from everyone, including ‘Big Papi’ who tweeted out a special message to our visitor urging Kevin to call him if he needed any advice on how to get adjusted from Minnesota to the hub. Of course Ortiz couldn’t resist ending his special tweet with a “#CityOfChamps.” That was a great touch, if you ask me. 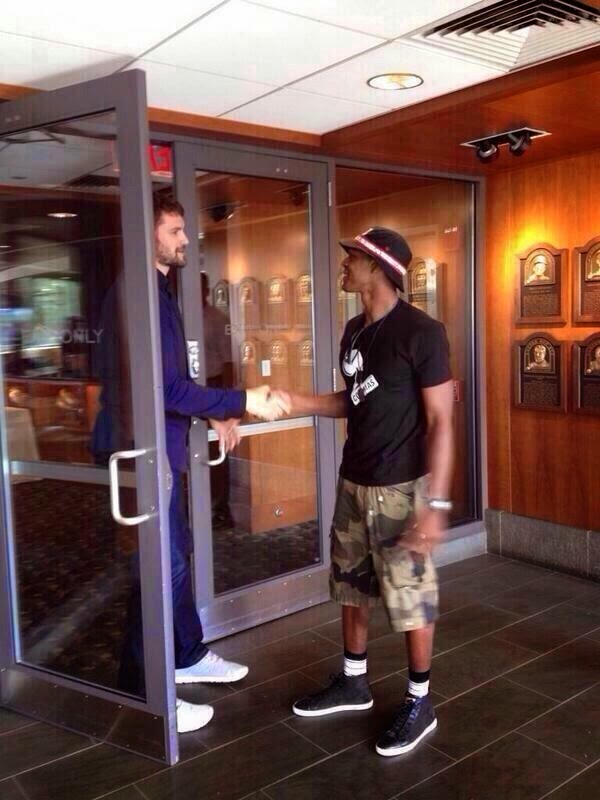 The best picture of the weekend came when Celtics Captain Rajon Rondo, who happened to be in Green Monster seats during Sunday’s Sox game, got word of Love being in the EMC club seats. The two were photographed meeting officially for the first time, which led to speculation of this being apart of the ‘plan’ or purely coincidental. When asked about making his ‘pitch,’ and how a player like Kevin could be apart of his future, he had this to say;

“I just told [Love] to enjoy his time here,” said Rondo. “I think we’d be a lot better if you add a guy like Kevin…I don’t need to say how good he is. The world sees it every night, or sees the stats every night. He puts up great numbers. But I think he wants to win now.” [ESPN Boston.com]

Bottom line adding a player like Kevin Love to a team where Rondo is your starting point guard is a great foundation on the way to banner number 18. Being that it is a contract year for Rajon as well, it all but solidifies the future for the Celtics for years to come. That would make it easier for the captain to re-sign. We don’t necessary have to wait too long for this to become a reality. Here is a good scenario that Ainge should visit come draft night to acquire the power forward.

Financially this deal would make sense, Wolves fans have to realize it’s been six years since Love entered the league, and it’s time to move on. The good news for them though they would have three picks in this year’s deep draft, while the ‘rebuilding’ phase won’t be as painful as the previous one in 2007. Plus they would be receiving tons of frontcourt help, including one Jared Sullinger, who could really flourish out west. But it’s anybody’s guess when it comes to what the Celtics GM has in mind.

“Nothing is happening, nothing is set in stone,” says Rondo. “We could talk about Kevin all day, or we could mention Carmelo’s name…We have a couple of weeks before the draft, things might shake up around that time, you never know. At the end of the day, I want to win. I want to win now, and I’m sure Danny will have the guys in here that we’ll be able to compete for a title.” [ESPN Boston.com]

The fourth of July is exactly one month from today; let’s hope for some 'fireworks' before then, because the summer of ‘Love’ could be well underway. 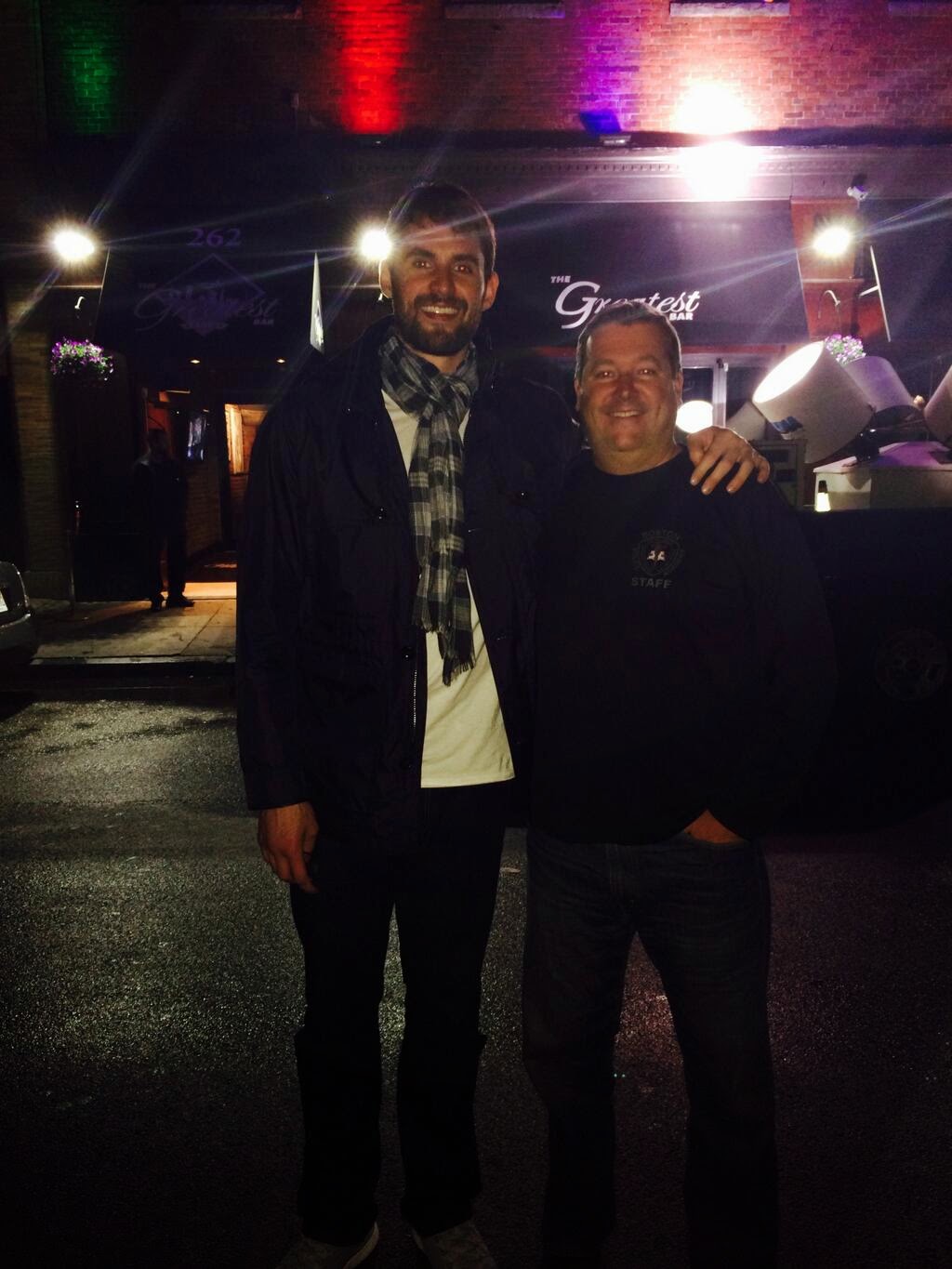