Can LeBron Take The ‘Heat’ Past The Spurs? 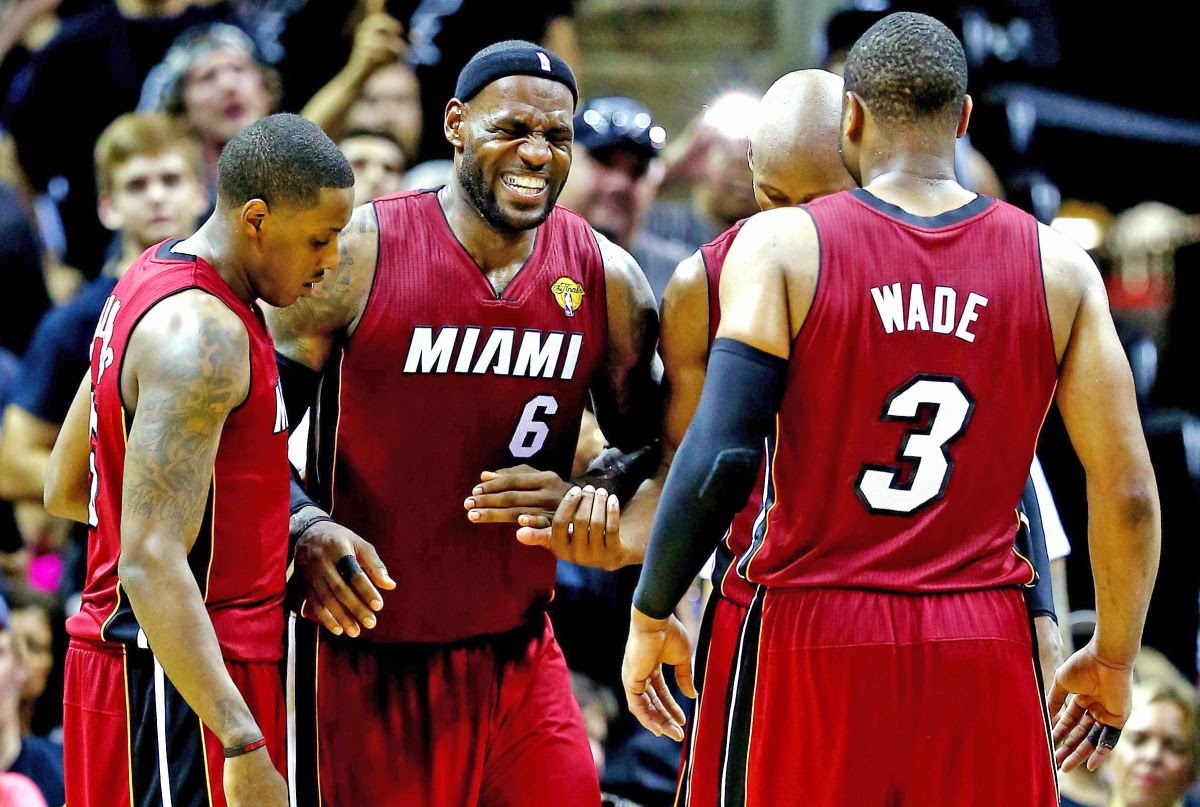 In the NBA Finals who ever wins game one, history has shown us that nearly 70-percent of the time they go on to win the championship. The San Antonio Spurs plan to add to that statistic after beating the Miami Heat 110-95 on Thursday night at the AT&T Center.

It wasn’t ideal playing conditions as the arena reached upwards of 90-degrees, due to an A/C failure throughout the building.

The Spurs, who led for most of the night, took advantage late in the fourth when LeBron James left the game because of severe cramps in his legs. With 3:59 remaining in the quarter, the Heat had to watched their best player get carried to the bench. Meanwhile San Antonio went on a 16-3 run to end the game and grab a 1-0 series lead to kick off their Finals rematch from a year ago.

“After I came out of the game, they kind of took off,” said James, who finished with 25 points in a limited 33 minutes. “It was frustrating sitting out and not be able to help our team…It sucks not being out there, especially at this point of the season.” [ESPN.com]

Despite the 22-turnovers committed by the Spurs, the home team won the assist battle 30-16 and shot 59-percent from the field, including going 13-of-25 from behind the arc (52-percent). While Miami shot 47-percent and made 12 3-pointers in 29-attempts, and committed less turnovers (16). But no one stepped up in the final minutes once James exited the game for good. San Antonio finished the fourth quarter outscoring the Heat 36-17.

“Just very proud of my team,” said Tony Parker who finished with 19 points and eight assists. “We kept believing, we kept pushing. We know it’s not easy.” [ESPN.com] 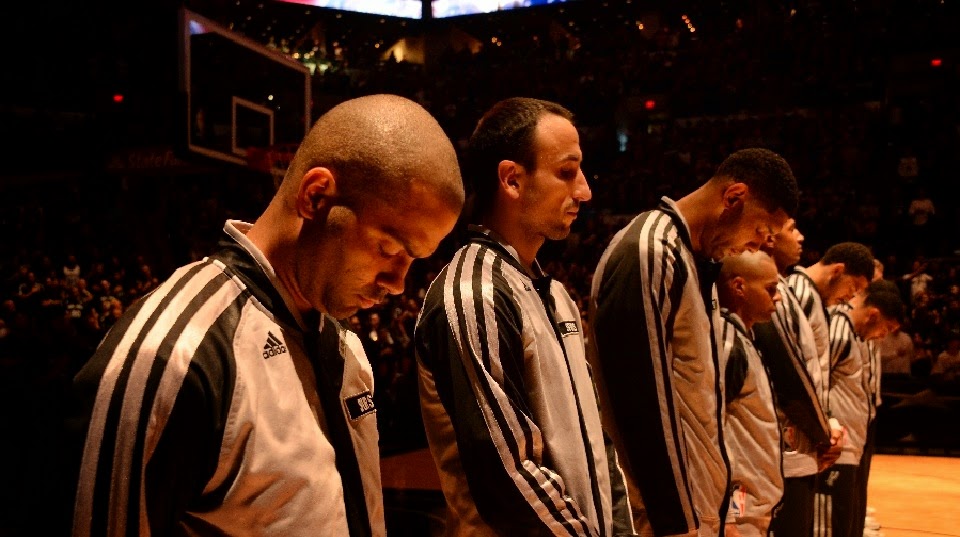 Most headlines have mocked LeBron James in his inability to stay on the floor in a very crucial moment three nights ago. Apparently he’s prone to having cramps and doesn’t know how to stay hydrated. Just two years ago the same thing happened in the Finals against OKC, but Miami was still able to win the game. So why didn’t the Heat’s medical staff take extra precaution this time around when everyone was well aware of the malfunctioning air-conditioners in the arena hours before tip-off? Now the NBPA is investigating the ‘horrible’ environment for it’s players just because James has a history of not retaining fluids in ‘normal’ conditions, never mind in hot ones. Why is this such a big issue again?

When the Heat lose this series, and they will in six games, don’t blame the failed A/C at the AT&T Center in game one. Blame LeBron who at age 29 (soon to be 30), still doesn’t know his body and his limits yet. Forget mental fatigue, when you play basketball from October to June every year for four straight seasons, and you add playing in the Olympics and a strong commitment to all things team USA especially in the last six years, it’s going to take it’s toll on you physically. How silly is it to take yourself out of a game down two with less than four minutes left because of cramps? Think about that for a minute. It’s the NBA Finals, you’re trying to do something that’s only been done a few times in the last 30 years, in becoming a world champion for the third consecutive year. Forget the fact it was 90 degrees, hell I’ve played ball in that kind of heat, and for hours. Believe me I’m nowhere in shape like Mr. James is, not even close. Granted it was outside but I’m pretty sure this was not the first time LeBron has played in similar conditions. Not even Walter Ray, who turns 39 next month, was affected by how hot it was.

If Michael Jordan, who most of said James is 'physically stronger' than when you compare the two, can play and take over an NBA Finals game with a fever of 103 and win? There should have been no reason to go through IV fluids (after the game), bags of ice, crazy amounts of bottled water and Gatorade (even though he endorses Powerade), during the game and still not get the job done, and let your team down, LeBron. You see, it doesn’t matter what is said about the best player in the game, he messed up. He knows it; we know it, add it to the list. But this will be just one of the many reasons the Heat will not repeat as champs. 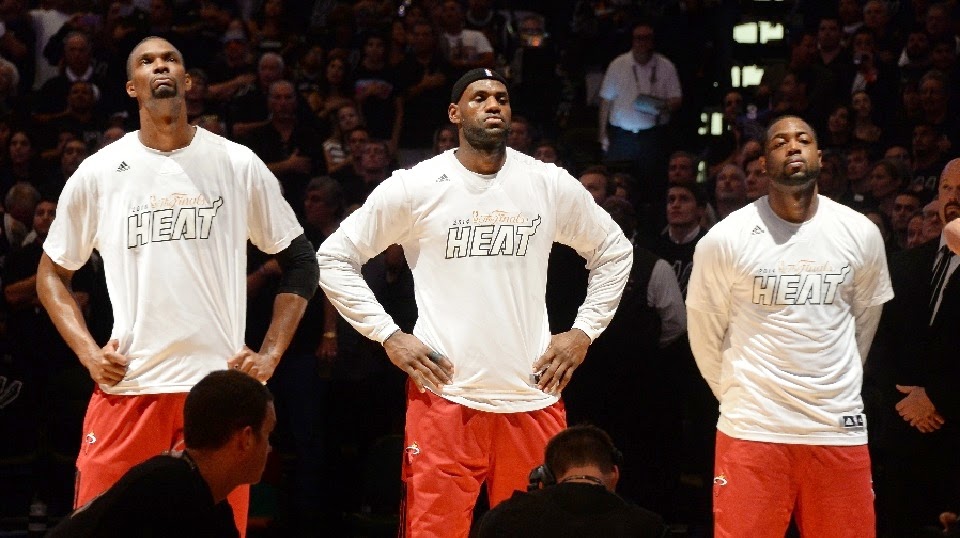 True basketball fans watch the game, and appreciate a great complete team when they see one. The San Antonio Spurs are a well-oiled machine, they saw an opportunity to win, and didn't let it go to waste on Thursday night. Much like the Heat have done (especially last June), they pounce when teams make mistakes. That's mainly how they have gotten to this point. Greg Popovich’s group knows they can’t afford to make costly mistakes. They almost have to play a perfect game and trust each other. That is what they have done pretty much all season long. Thursday night was no different for Tim Duncan (21 points & 10 rebounds), Manu Ginobili (16 points & 11 assists) and Danny Green (13 points).

Besides home-court advantage, the Spurs’ bench is the other edge they have over Miami in this series. They are clearly the deepest team in the league, and anyone of the ‘big four’ off the bench (Manu, Diaw, Belinelli, or Mills) can step up at key moments of a game. When you have that, plus the motivation of what happened a year ago, that is a dangerous combination to bet against. On the flip side, the Heat can’t just rely on James. Why else did Dwayne Wade play just 52 games this season? Even though both teams finished with five players in double figures in game one, the Spurs’ bench outscored the Heat’s 34-20. Just Walter hitting 3’s will not be enough this time around for Miami.

From a truly basketball standpoint if Spoelstra was smart, he would give quality minutes to Beasley, Oden and even James Jones. That might throw a wrench in Pop’s plans, but who knows. With no Mike Miller anymore, someone will have to step up on the Heat’s bench if they want to keep this series close. Otherwise broken A/C’s or not, LeBron is going to have to take the ‘heat’ for when he loses for a second time in his career to Timmy and Pop.