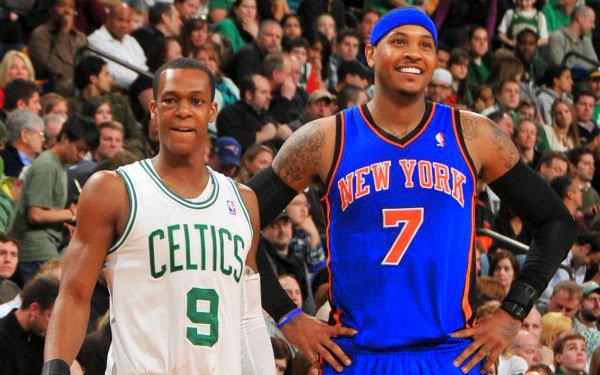 Rajon Rondo wants the Celtics to be contenders next season and believes that Danny Ainge can make that happen this summer.

Rondo was a guest host on ESPN's Numbers Never Lie with Jemele Hill yesterday and shared his opinions about Carmelo Anthony, Kevin Love and the possibility of the Celtics being relevant next season.


"You never know what Danny [Ainge] is capable of doing," Rondo said. "I can't tell you too much. We want to be contenders as well next year. We don't plan on being down for too long. I think Danny has a lot of wiggle room with what he's done the last couple years with the draft so I'm looking forward to what's going to happen so hopefully [Carmelo] doesn't go to Chicago."

Rondo continued on about the possibility of Anthony joining the Celtics:


"After we try to get Melo, or that additional piece, then who knows? The sky's the limit. I play to try to win a championship every year. And with Melo I think it's very possible."

Although Rondo answered "no" when Jamele Hill asked if he would be disappointed in the Celtics if they didn't land Kevin Love, Rondo had this to say about Minnesota's all-star:


"We need a couple pieces, but having a guy like Kevin Love wouldn't hurt as well."

Rondo sure sounded confident when talking about Ainge making a blockbuster deal and it sounded like Carmelo Anthony is very high on Rondo's wish list since he thinks with Melo a championship is "very possible."

Sure, Rondo would be thrilled if he could get Love and Melo to play with him but unlike Kevin Love, Carmelo Anthony can choose which team he wants to play for next season. Kevin Love may be on his way out of Minnesota but that doesn't mean Love will have any say in where he'll end up. Rondo is doing his best to keep Boston in Carmelo's mind. But without Love, I don't see Anthony seriously considering signing with the Celtics.

Anthony has until Monday (June 23) do decide whether to opt out of the final year of his deal with New York and test free agency.