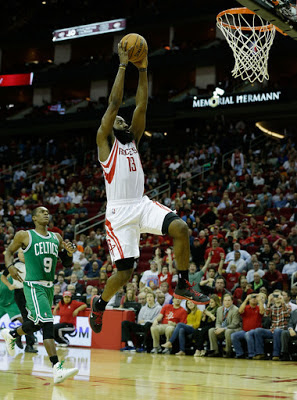 For the second game in a row, the Celtics relied on their captain to save the day in the fourth quarter, but he came up short in Houston and the Celtics dropped the first game of their three-game road trip.

With less than five minutes to go in the game, Rockets' James Harden hit a deep three to stretch the lead to eight points and the Celtics simply had nothing left.

Harden led his team with 21 points, five assists and five rebounds. Greg Smith, a reserve for Houston, chipped in for 20 points, six rebounds, and three blocks as the Rockets put together a run mid-way through the fourth quarter to seal the win against Boston.

Although the lead was cut to five in the fourth quarter, the Celtics struggled to find their offense. Despite the Rockets' 17-4 lead early in the first quarter, the C's were able to come back from the early deficit and actually lead at halftime by two points. But in third quarter, it was all Houston.

"In the third quarter, I don't think we stopped them any time they came down the court," Garnett said. "We needed to create some kind of defensive consistency, and we just weren't able to do that. In the second half, Houston got into a rhythm that was undeniable"

The Rockets offense outscored Boston 32-25 in the third quarter. And even though Rockets only had a five point lead in the fourth, Celtics looked fatigued from playing catch up the entire game. The five point deficit they faced going into the fourth turned to 14 within the last three minutes of the game.

The Celtics struggled offensively for much of the night. Pierce ended the game with 18 points but needed 18 field goal attempts to get there. Rondo scored 15 points to go with his 13 assists and Garnett pitched in with 14 points.

"We had some good runs but I never felt like we were going to win the game tonight," coach Rivers said. "I don't know why and I'm disappointed in the loss"


It doesn't get easier for the Celtics, in fact, it gets harder. Celtics continue their road trip tomorrow night in San Antonio to face the Spurs. 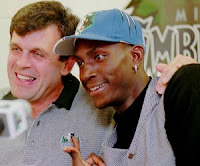 While the Rockets dribbled out the clock at the end of their 101-89 victory over the Celtics, Kevin Garnett headed over to center court and shared a long and emotional embrace with Houston coach Kevin McHale. McHale rejoined the Rockets six days ago after his 23-year-old daughter, Alexandra Sasha McHale died on November 24th of lupus-related complications.

Garnett, who was drafted by McHale when he was the Minnestoa Timberwolves' General Manager hugged and shared a few words. McHale's eyes began to fill up with tears after the powerful hug. It was a very emotional moment between the two. A number of Celtics players formed a line to say a few words to McHale along with Garnett. Coach McHale spoke briefly about KG in the locker room:

"KG and I go way back. There will always be a special place in my heart for Kevin," McHale said.

Josue Pavon
Posted by Josue Pavon at 7:23 AM
Email ThisBlogThis!Share to TwitterShare to FacebookShare to Pinterest