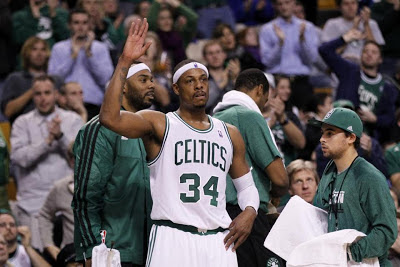 As he continues his legacy, inching closer to Havlicek in the Celtics record book, Paul Pierce's takeover games may happen less often than they did in the past, but they still happen.

Pierce scored 40 points against the Cavs as the Celtics beat Cleveland 103-91, Wednesday night at the Garden.

Pierce carried his teammates in the second half by scoring 17 points in the third quarter and lead a fourth quarter run to put away the Cavs, scoring eight points on a 12-3 run. He also knocked down six threes throughout the game and could not be slowed down by Cleveland.


"I think when you play like that it can be contagious," Pierce said. "Offensively, guys knocking down shots, and then other guys getting up in there and defending. Things can definitely be contagious. I know I think everybody definitely wanted to get off this slide we're on, so it's a good win, it's a start."

Fans of the Garden gave Pierce a standing ovation as exited the game. At age 35, Pierce is the oldest player in Celtics history to score 40 points in a regulation game.

Pierce has been hot lately. In the past three games, Pierce is 26 for 39 and has been shooting the ball very well. Without Pierce's great scoring, Celtics may have slipped below .500 if they had lost to the Cavs.

Unfortunately for the Celitcs, the bench didn't provide much of a lift. Doc Rivers was forced to play Garnett, Pierce and Terry 30-plus minutes in order to not let the game slip away. Courtney Lee led the bench in scoring with six points to go with his three turnovers, and Jeff Green scored three points and had one rebound. 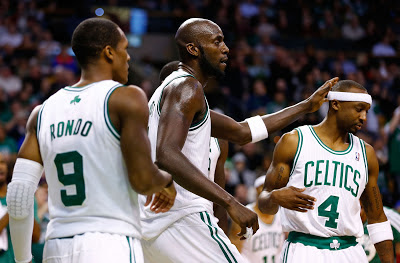 "Honestly our bench didn't give us a lift," Rivers said. "We have to get better. We had a 20-point lead, you sub in, and I think guys think when you have that lead it's scoring time now. And it's really defense time; you've got to continue to get stops. Then you can score. And I thought we short-cutted that part of it."

Terry, who returned to the starting lineup, scored 15 points and helped score points alongside Rondo, who had 20 points to go with his eight assits.

Kyrie Irving scored 22 points for the Cavs, and his teammate Zeller, the rookie out of North Carolina, scored 20. The Cavs' Anderson Varejao, the league's leading rebounder, sat out because of a bruised right knee. Without Varejao, Rondo was able to get in the paint and score with ease.

Celtics' next game is Friday, when they host the Milwaukee Bucks; a team that has been tough for the C's and has beaten them twice this season.

Jason Collins started in his first game of season for the Celtics, and by the end of the night he earned himself the game ball. Pierce gave him the game ball after the game as a reward for his hard work in the paint. Although he scored 1 point, grabbed a rebound and made one steal and fouled six times, that's not why Pierce appreciated his play. It's the things he does that you won't see in the stat sheet that the Celtics apprecaite. I love the idea of putting him in the starting lineup because he's a big body who is going to slow down scoring in the paint. He isn't a player who is going to get a lot of blocks. He will definitely get more fouls than blocks throughout a game but he can stop a player from scoring layups. Even if it means sending a player to the free throw line, Collins relieves Garnett from having to cover virtually every big man we play this season. Bass has been disappointing defensively (especially pick-and-roll defense) and when it comes to his offense, his bread and butter, there hasn't been any consistency. Moving Bass to the bench will hopefully spark his offense.


Josue Pavon
Posted by Josue Pavon at 2:28 PM
Email ThisBlogThis!Share to TwitterShare to FacebookShare to Pinterest