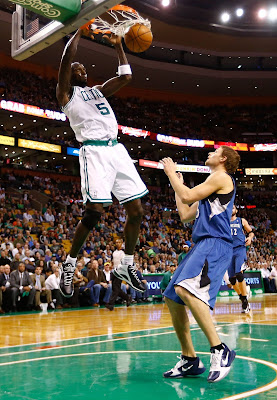 Rondo, returning from his 2-game suspension/Mexican vacation, handled the ball well in the second half and started a brand new double-digit assist streak. Celtics committed ten first half turnovers and couldn't find a rhythm offensively.

Kevin Love's 12 points and eight rebounds gave Minnesota a 51-47 lead at halftime. He finished the game with 19 points and 13 boards.

In the second half, the C's were on fire. Bass, who couldn't buy a basket in the first half, scored ten points in third quarter. Rondo scored 13 points in the second half and balanced the scoring for his teammates effectively, as the Celtics closed the door on the Timberwolves in the fourth quarter. All five starters scored in double figures.


"You can feel it starting to come," said coach Rivers. "It's not here but it's coming and you feel that. We've just got to push through. It's going to be a great month for us." Garnett, who hasn't lost against his former team since being traded to Boston in 2007 and always puts up big numbers when playing Minnesota, says that Celtics' rebounding is the biggest concern. And although he sees more effort in his teammates, their is still a lot of work to do.


"I think what you see here is that we as a team are trying to be better at rebounding," said Garnett. "Doc's been on our [butts] about giving up offensive rebounds, playing tougher, establishing something. Obviously, being called soft is not something that you want to be called."

Celtics' will start their back-to-back against Philadelphia this Friday night in Philly followed by a rematch at The Garden.

The third quarter seems the be the story of the 2012-13 Celtics so far. In all ten wins of the season, the C's have either had a steady lead going into the fourth quarter or trailing their opponent by no more than three points. They look mentally fragile. Because of a solid third quarter, the C's were able to grab a seven-point lead against the Timberwolves and felt comfortable going into the fourth quater. But when that isn't the case after the third quarter, the C's look very uneasy...
Rebounding was tested last night against one of the best rebounders in the league in Kevin Love. Sullinger continues to be the Celtics' most effective rebounder this season. He grabbed seven to go wit his seven points alongside Wilcox who grabbed five and scored five off the bench. Heck, even Bass was crashing the boards last night, he had 8. C's outrebounded Minnesota 45-41. I know, it's only plus four but if they could somehow grab 45 rebounds every night, Doc may take back last week's comments about his team being soft.


Josue Pavon
Posted by Josue Pavon at 3:39 PM
Email ThisBlogThis!Share to TwitterShare to FacebookShare to Pinterest