Rivers: Bradley not close to Returning 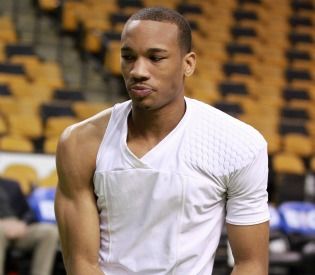 While reports have suggested that Avery Bradley is close to returning to practice, coach Rivers is less optimistic.

Bradley, who was a catalyst in turning the Celtics around last season, continues to rehabilitate from double shoulder surgery. Coach Rivers was asked Thursday morning on WEEI 93.7 FM's Dennis & Callahan if there is a timetable set for Bradley's return.


"I've seen him do skeleton offense," said coach Rivers. "That's with no defense- and he looked fine, he moves fine. His legs look great, that's because they didn't get injured. Having said that, I don't know. I heard yesterday two to three weeks before he practices again, so I don't know. I still think he's a ways away"

During an interview on  The Big Show, GM Danny Ainge chimed in on the topic and said that he hopes to see Bradley back on the floor during Celtics' California road trip that starts after the team travels to Brooklyn for their Christmas day matinee against the Nets. Ainge hopes to see Bradley try one or two games in California and hopes he will be available to make the trip.

The Celtics have been cautious with Bradley's recovery, but he believes he's closer to returning sooner rather than later.


"Doc kind of stays out of [when I would return]," Bradley said. "It's really up to the trainers and the strength and condition coaches and me, to see how I feel. It's hard for him to determine because I'm such a tough guy and I want to get out there. They put me through a lot of tests and I sometimes lie to them because I want to be back. They're just protecting me and I want to protect myself because when I come back I want to have no setbacks."

Celtics start their California road trip in Los Angeles to play against the Clippers, December 27th followed by Golden State on the 29th and conclude in Sacramento on the 30th.


Josue Pavon
Posted by Josue Pavon at 2:57 PM
Email ThisBlogThis!Share to TwitterShare to FacebookShare to Pinterest