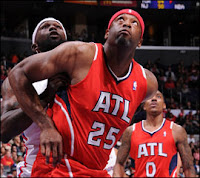 According to sources, the Celtics are interested in free agent Erick Dampier. Celtics reportedly will be bringing Dampier in "for a look" to see where he can fit in with the team.

It's no secret that the Celtics need a big man who can rebound and block shots to help their interior defense. And it looks like it's a center they're looking for. Although Kenyon Martin has been rumored to be a good big man option for the Celtics, he isn't a center.

It's slim pickings in the free agency pool but I don't think the C's should consider Dampier as an option to fill in the last roster spot. There's nothing he can do that other players on the roster can't. Erick Damiper? He's pretty much Jason Collins' older brother.

Dampier, 37, averaged 0.1 points (never seen this before) and 1.7 rebounds per game last season in 15 games with the Atlanta Hawks.


Posted by Josue Pavon at 1:55 PM
Email ThisBlogThis!Share to TwitterShare to FacebookShare to Pinterest