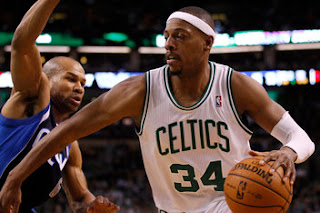 The Celtics were able to hold on to an ugly win last night against the "Dirk-less" Dallas Mavericks last night. It took the double overtime but the Celtics led by their Captain, Paul Pierce's 34 points.

Even though the Celtics blew two chances at the end of regulation and the first overtime to hit a last second shot to win the game, they outlasted the Mav's in what was an ugly win in the Garden.
It was an all around grind it out type of game, but the Celtics relied heavily on their captain to produce in crunch time. Pierce hit a three at the beginning on the second overtime, and the celtics never looked back.

Pierce put up his highest point total of the season, and is the first Celtic all year to score 30+ points. Also Pierce broke the 23,000 point barrier  for his career. He is only 3,384 behind Havlicek for the Celtics all time scoring record. 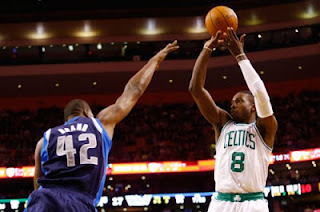 Rondo was one rebound away from another triple-double scoring 16 points and adding 15 assists and 9 rebounds.  He played 52 minutes last night and had the chance to end it in regulation, but was shut down by Derrek Fisher.

Jeff Green had a tremendus game showing that he has slid nicely into his role off the bench and had become a consitant scoring threat. He had 15 points last night, and seems to be developing a great chemistry with Rajon Rondo.

It was a tough game, but the Celtics were able to grind it out and are now 12-9 on the season. 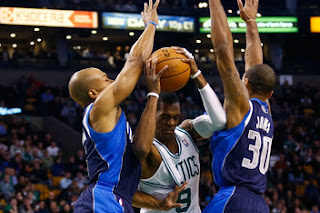 Notes:
-Jason Terry faced his old squad but wasn't able to shake his shooting struggles.  He shot 3-10 but did end with 10 points.

-Somehow the Mavericks were competitive last night even though the committed 27 turnovers. It probably had something to do with the 60 points in the paint they put up.

-
Posted by SeanDutra at 6:49 PM
Email ThisBlogThis!Share to TwitterShare to FacebookShare to Pinterest