Who does Celtics Nation Point its Lonely Finger at? 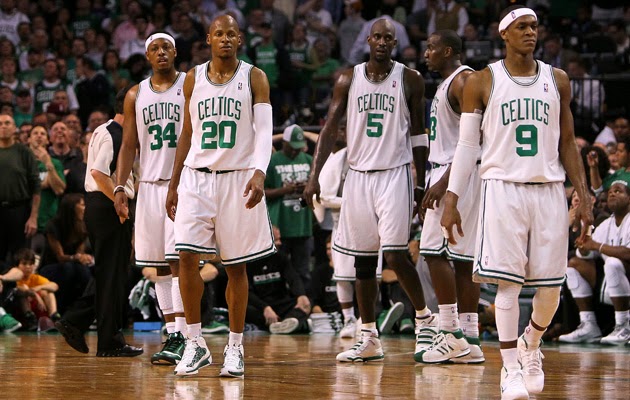 As the dust settles and the reality of the Boston Celtics Big 3 Era squad being fully disbanded sets in, it’s time to play the blame game. The knee-jerk reaction is to point the finger at Danny Ainge, but that just over-simplifies a rather complicated situation.

When a bad divorce happens, who’s at fault? Easy answer: the cheater.

So, Ray Allen was the first Celtic to create an NBA version of a Tinder account by visiting Pat Riley and the hated Heat.

So Jesus Shuttlesworth **swiped right** on the Heat -- the date became a divorce, which lead to a marriage between Allen and Miami, Ray-Ray hits that crazy corner 3 in Game 6 of the Finals and eventually helps win a championship for those chumps in 2013.

If Allen never leaves for Miami, perhaps Doc stays and perhaps they attract a top-tier 2012 free agent like Goran Dragic, Nicolas Batum or even the previously healthy Brook Lopez.

As we recall the season of 2012, when the Celtics lost to the Heat in 7 games of the Eastern Conference Finals, most could already sense that the relationship between Ray Allen and Rajon Rondo was getting thorny. Allen would run through 2-3 picks, race from one corner of the court, through the paint, reach the other side of the court and be wide open…and the calculating Rondo would look Allen off for a seemingly better option (as a point guard in my local fat man’s men league, I feel Rondo’s pain, but I also am smart enough to get the ball to our best players.

I’d rather have Allen taking a 3, instead of Brandon Bass getting blocked down low for the umpteenth time or giving it to Avery “sometimes-I-think-I’m-Jamal-Crawford” Bradley in the corner. Ray Allen secretly expressed displeasure in the locker room, but the situation seemed to never get fixed.  Like any relationship, when no one owns up to it, the disdain grows. Rondo is prideful. Allen is a future hall of famer. As time went on, the marriage got even rockier and the breakup seemed to have happened before it was official.

In 1996, (you’re wearing a Tommy Hilfiger shirt, your jeans are 3x too big and you haven’t worn shoes other than Timberlands since Easter) – a young up and coming hip-hop group named The Fugees release The Score. An album that even today shows how much talent the precocious producer Wyclef Jean had while the most polarizing person of the group, Lauryn Hill, was that rare triple-threat: beautiful voice, easy on the eyes and could slay rhymes like no other female emcee we’d ever seen (Pras was the Ringo Starr of the group).

Now it’s 1997, (you’re wearing’ a Nautica pullover, your jeans are now 4x too big and although your Timberlands are new, they are the same style from last year) – The Fugees break up, apparently out of nowhere. The hip-hop nation still discusses at any given chance at “what could have been” if they stayed together. We learned years later that the on-again/off-again romance between Wyclef and L-Boogie is what ultimately tore them apart. But honestly, Clef, who cares if the baby wasn’t yours and was (Bob Marley’s Son) Rohan Marley’s?  You don’t have to be together! Make records and move on! But it wasn’t meant to be.

Let’s liken that dismembering to the relationship of Ray Allen and Rondo (you can pretend Ray or Rajon is Lauryn Hill, but I’d rather not ruin the pedestal that I have sexy Ms. Hill on so I’ll just move on now). If 1-of-the-2 stepped up and said “I’m wrong, let’s move on and work together without being best friends” we might not be standing here today wondering if Phil Pressey or Evan Turner is going run the point. SMH.

If Rondo seeks out Ray Allen more often, just handled the situation with a bit more tact, maybe Allen stays. Even if they still pull the Pierce/KG to Brooklyn deal, I’d love to have Allen spreading the floor for guys like Kelly Olynyk and Jeff Green to create off the dribble.

On to the man that Rick Majerus dubbed “Doc.” Plain and simple, Doc left the Celtics high and dry. He gave up. He saw an aging team that had their chance (I still think the Celtics beat the Heat in 2012 if they landed David West instead of his punk ass leaving the alter for Indiana…I digress) to be the best in the East Conferance while it was dwindling, so he ran west. Many would do the same, but it truly disabled the Celtics for good. Let’s face it, Doc Rivers was Boston’s most attractive piece for solid free agents to want to come to Boston. Going back to the dawn of man, free agents never wanted to come to Boston. James Posey, Sam Cassell and P.J.Brown just wanted to be featured on an album of which they knew The Source (Hip-Hop magazine) was going to rate with 5 mics.  The other “gems” that the Celtics have gotten off the waiver wire were Pervis Ellison, the aging version of Dominique Wilkins (awesome, Jan Volk!), Tom Gugliotta (by the same Chris Wallace that has some great players in Memphis), Travis Knight (really, Rick Pitino?), Jermaine O’Neal and Rasheed Wallace (2-5 years too late, Danny Ainge, who we’ll get to later).

Doc changed the culture in Boston. He was engaging, responsible, accountable and players enjoyed working WITH him not FOR him. A friend of mine who writes for local outfit says that Doc is overrated, since he got to work with three future hall-of-famers. I disagree. He took the Orlando Magic into the playoffs with their best players being Darrell Armstrong and Bo/Charles Outlaw. Out of timeouts, Doc was Belichick-ian (remember earlier this year when the Celtics lost to Cleveland last month and Rondo dribbled at the top of the key without getting a shot off?  That would never happen on Doc’s watch. Remember the alley-oop to Rondo at Miami in 2010? How about the countless Pierce daggers? Amongst the players, he was one of them. When Doc left, Voltron lost its head.

Ironically, with Rondo going to Dallas, he is going to get the chance to stick it to his old coach and with his competitive fire, I see him doing well (i.e. the game against his breakfast in bed buddy Kobe was his best performance of the year).

The next suspect is the obvious one. I don’t know why, but I consider myself a Danny Ainge apologist. Maybe it’s because I cried when Ainge was traded in 1988. As an 8 year old, I really didn’t understand.  Did he piss off Larry?  Did he get in trouble?  Anyway, I feel like Ainge makes the most of what he’s dealt with. Yes, at times he can’t get out of his own way (i.e. the Kendrick Perkins trade in 2011 that pushed Rondo into singing sad Taylor Swift songs for the next 1.5 years) but the guy brought in Ray Allen for Jeff Green and obtained KG for Al Jefferson and a bunch of JAGs (a JAG = just another guy). Ainge drafted Rondo at #21 when everyone was saying Marcus “Who Am I” Williams of UConn (last seen in Serbia after playing in Puerto Rico, Russia and China) was far and away the better player. So Jeff Green isn’t LeBron. So Jared Sullinger has a derriere that rivals Kanye’s wife’s. Yes, I agree The C’s should’ve gotten more than three throw-ins and one 1st round (protected) pick (and a 2nd rounder) for a 4-time All-Star on Thursday.

As I continue to type/think, I realize that I’m drowning in reasons why Danny sucks, but to be frank, I’d rather he be driving the ship as the GM/basketball operations guy over 95% of the guys doing that job in the NBA (BTW, the GM in Toronto Masai Ujiri is a beast. I’d trade a night with Jenny Dell for him to be the C’s GM…actually, no I wouldn’t). He should’ve been given the Executive of the Year Award the year that he fleeced the Brooklyn Nets into taking the Celtics aging heroes, The Truth and The Big Ticket.

With that being said, 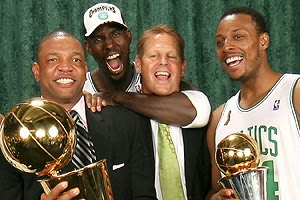 At 12:00 PM EST today, the count of the #FireDannyAinge on Instagram was only at 47, so I must not be alone in thinking Ainge WASN’T the problem.

The final suspect is going to surprise a lot of Celtics Nation. The guy was the pulse of the “Ubuntu years” and still receives my admiration for his fire and determination even with his diminished skills (see him trying to bite Joakim Noah?).

At the time of him going on the free agent market in the summer of 2012, KG had already netted career-earnings of $280,000,000.00 all in NBA paychecks (this doesn’t count his past sponsorships with Nike, And1, Adidas and now China-based Anta. Come to think of it, I can’t believe the Big Ticket rocked so many darn companies on his feet.  4 sneaker companies?  More ex-Sneaker sponsors that Derek Jeter got ex’s!).  $280 million puts him just under Shaq and Kobe for career NBA earnings ($290-325 million, but what’s 35 milli amongst friends?). He signs with the Celtics for another 3 years at 34 million dollars.  Perhaps the Celtics could have allocated that money in a number of different ways to add other pieces in the summer of 2012.  KG is not worth that money at that point in his career and it didn’t help the cause.

Which suspect do you blame for the breakup of the “Ubuntu Celtics?”