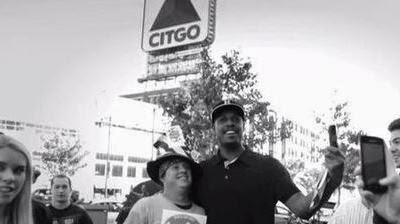 Paul Pierce's love for the city of Boston only grows stronger the longer he's away.

After 15 years in Boston, Pierce was traded last year to Brooklyn but hasn't stopped professing his love for the city he used to play for, a city he calls his second home.

Pierce posted a video entitled 'Back to Boston' yesterday on The Players Tribune, the website created by Derek Jeter.


"Man, I miss Boston," Pierce says in the beginning of the video, while he cruises through Boston in the backseat of a car. He gets out of the car at Kenmore Square and decides he'll walk to TD Garden from there while posing for pictures with fans.

"And that Boston accent? I can't even understand it," Pierce continues. "Fifteen amazing years and one championship. It's like a second home to me, especially the Gahden. I can't wait to play here again. Gonna drop 30 for old time's sake..."

It hasn't been that long since Pierce was last seen in Boston. Last September, Paul gave diehard Celtics fans a memorable moment when he ran onto the field at Fenway Park in a Celtics warm up during a pregame ceremony for Derek Jeter's final game. Seeing Pierce in green again was a sight Celtics fans only dreamed of since he was traded one year ago, and for one moment he made it come true. Even though it wasn't on the parquet, it was still a reminder for C's fans of how much the city of Boston really means to him.

What other professional athlete would do such a thing? Most active players wouldn't wear a former team's logo while being signed to another team. Especially because Pierce was traded by Boston, yet he has never stopped saying how Boston will forever hold a place in his heart.

Pierce, now a member of the Washington Wizards, had an emotional return with the Brooklyn Nets last January when he played at the TD Garden for the first time as a visitor. There will be another homecoming at the Garden tomorrow afternoon when Pierce makes his only visit this season.

Washington has been good to Paul so far this year. Pierce is someone who has shown veteran leadership to the Wizards and has made some late game clutch shots, a role Washington was missing.

The Celtics will take on one of the best teams in the East twice in two days. First game will be at home and the second will be in Washington on Monday.

Pierce, 37, has been a catalyst for Washington's success. The former Celtic is averaging 12.5 points, 5 rebounds this season and is a threat for late game scoring. Much like he was in Boston, Pierce is a go-to guy late in the fourth quarter and has also been a mentor to young players like John Wall and Bradley Beal.

Last week in a game against the New Orleans Pelicans, the Wizards blew a ten point lead in the fourth quarter and were down by one late in the game. Pierce drove the ball in for a layup to put the Wizards ahead and followed that up with a three-pointer that put Washington up for good. And two weeks ago, Pierce put the Milwaukee Bucks away late in the fourth quarter when he scored 7 consecutive points, and finished with a season-high 25 points.

Wall and Beal, one of the best backcourt duos in the league, leads the team in scoring, assists and steals per game. Rajon Rondo and Avery Bradley will have to keep up with the two on both ends of the court. In the frontcourt, Marcin Gortat is quickly becoming an elite center while averaging 14 points and 9 rebounds this season, and is someone who can be relied upon to score in and around the paint.

Washington's depth is what also makes them an overall great team. Led by their sixth man, Nene, the Wizards' bench is deep. Rasual Butler, Otto Porter along with veteran Andre Miller, can score a lot of points off ant any given time. Nene and Butler both average ten points per game and give added depth to their frontcourt.

The Wizards are enjoying their best start since 1974, they're currently second in the Eastern Conference at 13-5 and are riding high on a four-game winning streak. The Celtics kick off their home and home against the Washington tomorrow afternoon at 1:00 PM.