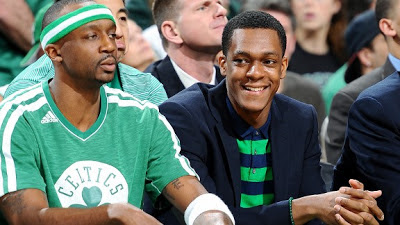 When Rajon Rondo tore his ACL on January 25th against the Atlanta Hawks, the Boston Celtics faced a make or break portion of the 2012-2013 season. At that point they were three games under .500, at 20-23. The season looked like a complete wash without their star point guard the rest of the way, but in typical Celtics "Go ahead, tell us we have no chance. We'll prove you wrong" fashion, the Celtics railed off  eight wins out of their next nine games including wins against the Heat, Clippers, Lakers, Nuggets, and Bulls.

The Offense, that had looked stagnant all season was suddenly efficient with a combination of Paul Pierce, Avery Bradley and Jason Terry getting them into their sets. The ball movement improved drastically without Rondo's presence on the court. It was an interesting situation. The C's lose arguably their most important player and all of a sudden look like a legitimate threat in the East? Were the Celtics better off with out Rondo?

Then came the Playoffs.

The Knicks were able to exploit the fact that the Celtics had no true point guard. The absolutely wrecked havoc on the C's offense and may have killed Avery Bradley's confidence for good. So,are the Celtics better with out Rondo? The debate is still out there to be made but it is very clear a back up point guard and heir apparent for Rondo after his time with the Celtics is up is clearly a big need for the C's going forward.

Don't look at the stats when it comes to Schroeder. He is underwhelming with his production in his first season with the big league over in Germany. This guy is lightning quick, has a great handle, has shown an ability to shoot quite effectively from deep (40%).

He is 6'2 but has a 6'7 wing span, long arms and big hands and a sound frame. Physically, he has drawn comparisons to Rajon Rondo coincidentally.


The knock on Schroeder is that he is extremely raw. He's only 19 years old and would be a project for Doc to work and develop, but the potential is through the rough. He would certainly benefit from learning behind Rondo for a year or two, and if all things go well could take over the reigns if Rondo demands a max contract when his deal comes up in 2015.

Likelihood of Dennis Schroeder being available at 16: Good- Schroeder is the 4th or 5th ranked pg in the draft but has drastically rose on numerous mock drafts.

NBA Comparison : He may have the make up of Rondo but is a better shooter and less talented distributor. Reminds me a lot of Darren Collison and Reggie Jackson. Most likely will have a Jackson type role for the C's in his rookie season but could develop into a much better player. 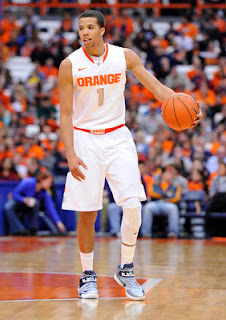 A break out star for the surprising Orange as they marched to a Final Four Appearance this season. MCW was as solid a player in the tournament with a consistent and reliable handle and showed the ability to get his teammates involved. He's probably the best pure passer in the draft, and finished 3rd in the nation in assists.

MCW has been up and down draft boards, some say in he top ten. I wouldn't mind this pick for the Celtics but what MCW has in stability he really lacks in explosiveness. He's solid but will not "wow" you with any one play, the polar opposite of Schroeder. Not necessarily a bad thing, but it is a knock on him going into the draft

Likelihood of Michael Carter Williams being available at 16: Getting more and more likely as draft process continues. Like I said many thought he could be a Top 5 pick after the season ended, hes dropped consistently from being totally off the C's radar to actually being a possibility that he'll be there.

NBA Comparisons: To me he reminds me of a taller, slower Andre Miller, obviously, with less gray hairs. 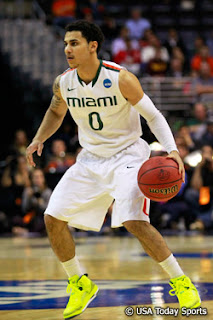 If you can definitively say one thing about Shane Larkin, he knows how to win. He brought a very under rated Miami team to a first place finish in the ACC. He is very strong on the ball and has a knack for getting to the bucket. Last year, Larkin was very calm and collected in the final moments of close games and showed great leadership skills. He has the mental fortitude to lead a team, and that was on display last year on numerous occasions.

Larkin is only 5'11", and is entering a league where the undersized point guard is a thing of the past. Yes, the Ty Lawsons of the world are still out there but Larkin really doesn't have the blazing speed that small point guards need to make up for the size disadvantage. That will hurt him on the defensive end, and with Doc and the Celtics that will hurt his chances.

He is great on the pick and roll which is certainly something that will help, but he will have to prove he can distribute in all situations. He will make a great back up point guard in the league, just not a real high ceiling for this guy. If there weren't so many other intriguing point guards that should be available before him, I would really like the pick , but in this draft class the C's can do better.

Likelihood of Shane Larkin being available at 16: High, almost guaranteed. Like I said for a draft class that has been criticized for lack of depth, the point guard position is deep in the top 20.

Stay tuned for Part III of the Celtics Mock Draft Room 2013. In the final chapter we'll look at the Celtics biggest need going into next season, REBOUNDING. Plenty of Seven footers in this draft too, we'll have em for you guys next week.