Rivers will return with Celtics for 2013-14 season 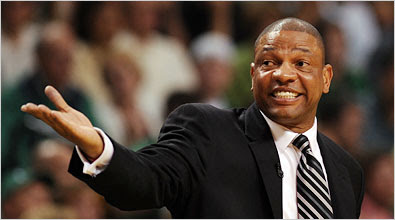 Although it's unclear if the aging core of the team will return, Doc Rivers will be back on the bench coaching for the Celtics next season.

At the NBA Draft combine Thursday afternoon, Celtics president of basketball operations Danny Ainge confirmed that Doc Rivers will return to coach his club next season.

Rivers' return is good news for Celtics fans after some speculation that he was considering not coming back. This is also promising news, so far, for those hoping to see the Celtics "run it back" next season with Paul Pierce and Kevin Garnett.

Although Ainge has stated that he is confident that Garnett will return with the Celtics next season, nothing has been confirmed.

There's no doubt that Garnett would have had an easy decision to make if Rivers decided to step down. He's made it clear in the past that there is no other coach in the NBA that he would rather play for and if Rivers had decided to move on from the Celtics, Garnett ultimately would have done the same.

Ainge's next decision is the biggest one he'll have this summer: Paul Pierce. Celtics have to decide by June 30 whether to buy out Pierce's contract at $5 million or to bring him back for another season at $15 million.

Whether Ainge decides to move on next season without Pierce and Garnett, bringing Doc back for a tenth season in Boston is a great start to a very crucial offseason.

In a summer when Ainge has a lot of tough decisions to make, this one has to be his easiest.
Posted by Josue Pavon at 3:02 PM
Email ThisBlogThis!Share to TwitterShare to FacebookShare to Pinterest
Labels: blog, boston, causeway street, celtics, doc rivers, joel pavon, josue pavon, kevin garnett, paul pierce, sean dutra