Ainge yet to talk to Pierce about his future 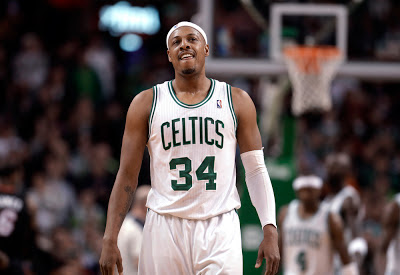 While rumors continue to swirl about Pierce expecting to either be dealt or released, Celtics president of basketball operations Danny Ainge has continually told reporters that he has not communicated with Paul Pierce since the season ended.

The 2013-14 season will be the final season of Pierce's contract, but only $5 million of his $15.3 million is guaranteed. Celtics have to decide if they want to buyout Pierce's contract, bring him back for another season or trade the future hall-of-famer.

Even though Ainge and Pierce haven't sat down to discuss Pierce's future in Boston, some media members think Pierce returning for another season is unlikely.


'I don't think they will (bring Pierce back)," said Dickerson. "And I know the company that Paul Pierce hangs around in, they do not believe - and I don't think Paul Pierce believes that he is going to be brought back at $15 million. I know for a fact that people around Paul Pierce have pretty much resigned themselves to the fact that he's played his final game in a Boston Celtics uniform. Again, Paul want to stay - obviously for $15 million, but he wants to finish his career in a Celtics uniform."

Rumor has it that Pierce has already come to terms with the situation and that his family is actually already preparing to relocate this summer, according to the Boston Globe.


"The Celtics have to decide by June 30 whether to buy out Pierce's contract at $5 million. Ainge said the sides have not had discussions, but an NBA source said Pierce's family is already beginning to prepare for relocation from Boston, assuming the Celtics will execute the buyout or trade his expiring contract in the offseason" [Boston Globe]

In a league where it's rare to see players stay on one team for an entire career, it seems wrong to let go of Pierce and not allow him to finish his contract. He's been loyal to the Celtics throughout his career and has stuck with the team throughout the tough seasons in Boston.

Even though Pierce didn't shoot well against the Knicks in the first round of the playoffs, he put up great numbers during the regular season, especially after Rondo's season-ending injury.

Pierce averaged 17 points, 6 assists and 7 rebounds from when Rondo went down in late January until the end of the season. The only other player that put up better numbers in that span was Mr. MVP himself, LeBron James.