It's no secret. The Boston Celtics most glaring weakness over the past few years has been a lack of rebounding.  The stats are alarming. (Read the following at your own risk)

The rebounding deficiencies of this team haven't necessarily translated in to sub-par seasons. In 2009 when they finished second to last in total rebounding and last in offensive rebounding, they were within eight minutes of an NBA Championship. Since that day, and the largely criticized Kendrick Perkins trade months afterward, the Celtics have started to see just how a lack of rebounding can negatively effect your season.

So there is no question the need is there, but there is the question is whether the C's will address this need in the upcoming draft. Last year, Danny Ainge did do just that, drafting Jared Sullinger and Fab Melo. Sullinger seems to be panning out into exactly the player they need minus the injury concerns, but the jury is still out on the Fab Melo, as he spent most of the season in the D-League.

If the Celtics do go the route of a big man in the draft, they need to go with someone who has the potential to contribute right away. The rebounding plague that haunts this team is not going to cure itself, and they cannot afford to wait three years for a big man to mature.

Whatever way the Celtics decide to go, the fact is the draft is deep with size, and there should be a few 7-footers available for the Celtics at 16, lets take a look. 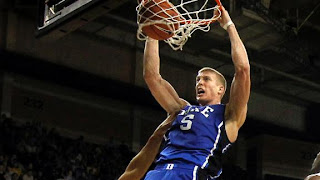 Duke has always produced successful big men to the NBA level. Is Plumlee the next in line?

He was extremely consistent over his four years of playing for Coach K.  Plumlee
is stocked with pure athleticism. He also has no problem mixing it up down low and has a knack for getting those tough rebounds.

His offensive game is pretty basic.  He has a decent mid range jumper, but can certainly dunk the ball and is consistently there for put backs. Defensively, he has solid size and intangibles that would really fit the Celtics needs down low.

His brother Miles, is currently on the Pacers and really struggled to get into any games this season. Mason is projected to be a more impact player.

Likelihood Mason Plumlee will be available at 16: Chances are good here. Plumlee has been projected  in the late lottery. If a few picks go the other way he could be available for the Celtics who sit just outside the Lottery at 16.

NBA Comparison - Well his brother Miles would be a pretty accurate comparison seeing as they have the  same Plumlee blood flowing through their veins, but Mason is a lot more talented. I would say his ceiling would be a David West type guy, a lot of grit and athleticism. Dieng, a key piece to the Louisville National Championship run this year,  is probably the best NBA prospect from the top college team in the country.

He is a beast in the paint and has shown significant improvements over his 3 seasons playing in the Big East.

Dieng has the potential to be a defensive force in the NBA. He is long and has shown the natural instinct to be a professional shot blocker.  As a sophomore he was averaging 3.3 blocks per game, and 2.8 as a junior.

The Celtics could use a guy who will fill the gap for the inevitable retirement of Kevin Garnett over the next few years. Dieng is not KG in the least bit offensively or as a leader, but the defense and rebounding he could bring to the table would help replace that portion of his game. Plus, the thought of Sullinger and Dieng, or Plumlee for that matter,  as the future of the front court would certainly help the major rebounding need for the C's

Likelihood of Gorgui Dieng being available: High.  Dieng is valued at a mid to low first round pick. There are a lot of big men who look to be projects with a higher ceiling that will probably be taken off the board prior. You get what you see with this guy and will be ready to contribute right away.

NBA Comparison :  Festus Ezuli. Reminds me a lot of the rookie from last year who was able to truly make his name on the Warriors this year with his presence down low.

This draft is full of 7-footers with a lot of potential. After drafting Fab Melo last year, it would be wise for the Celtics to stay away from any projects. Including the likes of Lucas Nogueira , Rudy Gobert, or Steven Adams. They may turn out to be better players than Dieng and Plumlee but from all accounts are 2-3 years away, plus Fab Melo all ready has the D-League center spot wrapped up.