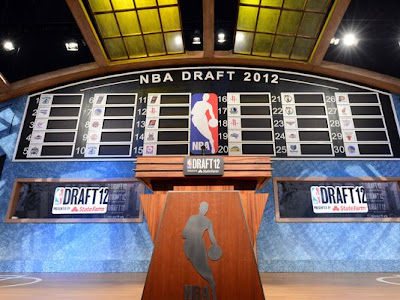 As the draft order is now set, the speculations begin. Just looking at the initial mock drafts from the so called 'experts', there is a wide range of possibilities for how the draft will play out. Instead of taking part in the  foolish and impossible task of trying to predict a full first round Mock Draft, lets set up a pretend draft day war room for the Celtics. (Much less foolish....right?) 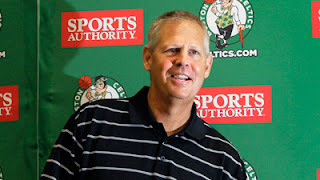 Lets start first by addressing the Celtics needs. I think it is safe to say, the overwhelming need when looking at last years team was rebounding. The Celtics ranked 29th in the league rebounding the basketball, which is unacceptable for a team that had preseason championship aspirations.  So initially, that would be at the top of my list if I were Danny Ainge.

Along with a big man there was a glaring need in the playoffs for a back up point guard. The Celtics were foolish to not pick up a veteran ball handler at the deadline, knowing Rondo was out for the rest of the year.  In the playoffs, especially in the first three losses to the Knicks it was a embarrassing effort from the C's ball handlers turning the ball over 103 times in 6 playoff games. 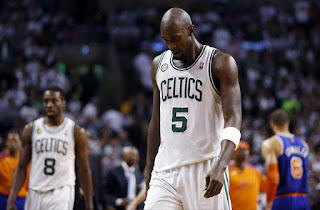 The last need that the Celtics will need to address is offensive firepower. Last season, there were times when if Paul Pierce was cold, there was literally no one the offense could run through. Now with the inevitable trade/release of Paul Pierce coming this off season, they need to get a swing man to compliment Jeff Green with the ability to score. It would also be nice to have someone who could shoot from distance. The Celtics were ranked 18th in points per game last season with 96.5, yet in the playoffs we all know about their brutal and borderline unwatchable struggles scoring the basketball went down to averaging only 82.5 ppg.


So with all those needs considered and the looming rebuilding/ treading water period ahead of the Celtics it is vital they nail this pick. They currently have the 16th overall pick in the draft, right outside the lottery, and in a draft class filled with big man, slashers, and scorers the Celtics will have a few options.

I'm actually shocked that Muhammad, who many thought at the beginning of the college season was in the conversation for top overall pick, has been on such a free fall down the draft board.  Shabazz came out of his senior season at Bishop Gorman High School, as the top recruit in the nation. He ran into some trouble at the beginning of his freshman season at UCLA, missing the first 4 games of the season for some alleged violations about a very expensive backpack he was spotted with. (side note...screw the NCAA and their hypocritical dumb ass sanctions that always penalize the kid, not the school, and definitely not the bottom line for the brass.  But that's another story for another day...)

Muhammad is a slasher, who definitely has NBA athleticism and body with a 6-11 wingspan. He can create his own shot. The knock on him though is his consistency, as there were entire games, or portions of games were he was invisible. He has a scorers mentality and hasn't met a shot he doesn't like.

The Celtics could use a scorer with size, and Muhammad would be a great addition to a young core of Rondo, Sullinger, Bradley, and Green. He is the definition of a boom or bust pick.  He could pan out to be an absolute steal with the 16th pick, or be just another over hyped high school star that couldn't adjust his game to the next level. With that being said, if he is available the C's would be smart to snatch him up.

Likelihood of Shabazz Muhammad being available : Low, but at the same time last year, Jared Sullinger was still in the conversation as being a top 5 pick, we know what happened there. Yes, he is dropping but it's not injury concerns, more attitude and maturity issues, so we'll see how his stock is as we inch closer to the draft.

NBA Comparisons: Like I said Boom or Bust - If he Booms-James Harden. Seriously, watch Hardens college game tape.  His body and skill set at Arizona State is eerily similar to Muhammad. The maturity was definitely there with Harden though, so that's one major difference.
If He busts- Nick Young, Jordan Crawford, or anyone else that just will jack up shots to the point it hurts their team.

Tony Snell : New Mexico  SG 6-7 198lbs Junior
2012 Stats : 12.5 ppg  2.6 rpg  2.9 apg
I'd like to start off saying that I am extremely intrigued by this player. He is a freak size-wise at 6-7 for a shooting guard. He has a wingspan of 7ft and is an absolute lights out shooter. Watch some film of this guy and the first thing you'll notice is how fluid his game is. In reading some comments about Snell from certain scouts one thing stood out. "If Snell doesn't do it smooth, he doesn't do it." That statement is extremely refreshing for a Celtics fan who have been dealing with choppy and uncoordinated game of Courtney Lee at the 2-guard spot last year.
Since Ray Allen has left the Celtics have been in need of an outside threat in their back court. Snell can certainly add that dimension to the C's offense. That being said he can also do things like this...
and then this...

Now, I'm not going as far as the commentator with any more James Worthy comparisons but that explosiveness, mixed with the smooth stroke and quick release could be an  extremely interesting road for the Celtics to go down.
The ascend up draft boards for Snell, and his strong showing at the NBA Draft Combine is a good sign for the shooting guards draft stock and is projected right now as a mid first round pick. He is also known as being a player that thrives in the late moments and pressure situations.
The only knock would be his production and ability to take over a game, scoring only a modest 12 points a game in his junior season. He also was very ineffective in the first round loss to Harvard in the the opening round of the NCAA tournament.
Likelihood of Tony Snell being available: High- He is projected in the mid to late first round and to be available for the Celtics, but like stated earlier he is rising up draft boards.
NBA Comparisons : The NBA has seen it's share of lanky and skinny shooting guards coming out of the draft.  The Wesley Person and Andre Iguodala comparison seems to be the norm, I've also seen projections and comparisons to  Chandler Parsons game. Based on the idea that he still has room to grow and build off his college production.  The track record for players like Snell is usually toward the bust side of things, but it seems different with this guy, due to his outside shooting and confidence.

Erick Green Virginia Tech SG 6-3 180
2012 Stats  25.0 ppg 4.0 rpg  3.8 apg
The NCAA's leading scorer and ACC Player of the year has consistently improved his game and production over his 4 year career at Virginia Tech. He was on a bad VT squad and was basically their only offensive weapon. However, he has improved his shooting every year finishing with 47%/39%/81% shooting splits from his senior season.
When you're the only player the other team is trying to stop, shooting 47 % from the field is pretty impressive, just ask Carmelo.
He is average size wise and before balling out in his senior season, he was probably going to be fighting for a D-League roster spot in the fall.
I wouldn't necessarily reach for Green at 16 but the potential for the C's to grab him would be an interesting move. Since the deletion of High School players participating in the draft, teams have been  big on 4-year college players and usually are interested with a guy they can plug in right away. If your looking for offense, Green may be an option for teams picking in the late first round.

Likelihood of Erick Green Being Available : Extremely High - Green will be available, it will be a reach but the C's only have the one pick in the draft this year, so I'm not ruling anything out.

NBA Comparibles : Poor mans Eric Gordon, most likely a Delonte West type player, with a sound head on his shoulders.

Stay tunes for Parts Two and Three of the Mock Celtics Draft Room coming soon! Next up we'll look at the potential prospects to help back up Rondo, and add some stability to the backcourt when he's on the bench.