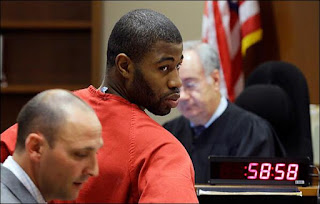 Celtics guard Terrence Williams is scheduled for a second court hearing Wednesday in Kent, Washington, where he will be investigated for second-degree domestic assault.

Williams, who was charged on Monday, was arrested Sunday afternoon after police said he threatened the mother of his 10-year-old son with a gun. If convicted, Williams may face a suspension by the NBA.


He was arraigned Monday, where a judge set his bail at $25,000. The backup point guard was released from jail after posting bail.

Williams tweeted this from his account Monday: "A Million Stories Not One Thats TRUE... Thanks To Those That Continue To Support Through Devil Testing Times ... Those Thats Negative ... THANKS"

Williams averaged 4.6 points, 1.8 rebounds and 1.6 assists over 13.3 minutes in 24 games last season for the Celtics. He was signed mid-season and has a year left on his non-guaranteed contract.

This certainly won't help Williams' chances of making the team next season. The last time a Celtic was brought up on charges involving a firearm was Sebastian Telfair and he was immediately kicked off the team. Hopefully things will be different for Terrence. Celtics can opt to waive him before Oct. 31.