Defense has been the culture of the Celtics for the past five years. Doc has instilled a system in his players- defensive stops lead to offensive opportunities.

When the New York Times asked Dwyane who plays him the toughest on defense, his answer didn't surprise me. 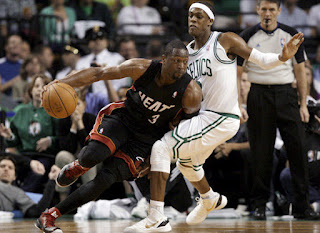 "I would say it's more about the teams that play defense more than an individual player," Wade said. "The Boston Celtics team defense is tough. The game is different now. It's not one guy that shuts you down. It's a team. They play a defense that stops you from getting to the paint."


Although Wade's numbers in last year's Eastern Conference Finals were down compared to his overall 2012 playoffs numbers, he still finished with solid numbers against the Celtics. Wade averaged 21.4 points per game and shot 44% from the field. With no Avery Bradley to guard him, Wade was able to get to the hoop and the foul line more often against the Celtics but admits that it wasn't easy due to Boston's defense.

Doc's defense is the main reason why we nearly knocked out the Heat in Game 7 of the Eastern Conference Finals. And I think we have a chance to improve that defense if we can do a better job crashing the boards.

Rebounding needs to improve in order for Boston to be tougher against Miami. The defense is solid against the Heat but if Boston can out rebound their opponents from South Beach, it will make things a lot easier. Although Celtics finished second in fewest points allowed by opponents last season (89.3 ppg), they finished last in rebounds per game (38.8rpg).