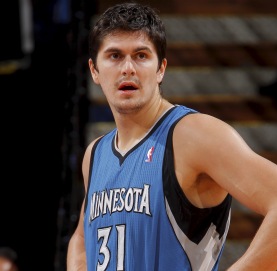 According to CSNNE.com’s A. Sherrod Blakely, the Celtics will be adding big man Darko Milicic to their roster. The 27-year-old free agent has agreed to sign a one-year contract for the veteran’s minimum.

The Celtics look a bit thin at the five spot. With only Chris Wilcox and Jason Collins coming off the bench for Garnett, the Celtics could use another big man. The 2003 second overall draft pick was amnestied in July by the Minnesota Timberwolves and was offered a three-year six million dollar contract to play for the Spanish club Real Madrid but turned it down to remain in the NBA.

Along with Minnesota, Darko has also played in Detroit (where he was drafted), Orlando, Memphis and a very brief eight games stay with the Knicks. The Serbian player brings career averages of 6.0 points, 4.2 rebounds and 1.3 blocks in 18.5 minutes and a 2004 championship ring (I’m sure he doesn’t brag too much about) to Beantown. This signing gives Boston 14 guaranteed contracts and another seven-footer as they head into training camp in nine days.

Signing with Boston could mean more playing time for Milic behind KG. Milicic will be battling for minutes with Wilcox but is a better overall player offensively and defensively than Jason Collins. This is a good pick up and there is a low risk involved. Boston was the first team on Darko’s list after he was waived two months ago.