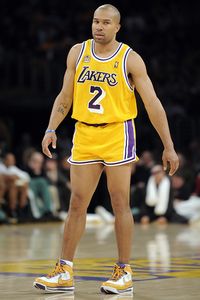 The Celtics were surprised when they learned that Keyon Dooling had decided to retire, and left the club without another established point guard to help relieve Rondo. According to reports, Celtics have shown some interest in the veteran point guard.

I know, I know, it's Derek Fisher I'm talking about. But hear me out! Think about the type of point guard that the Celtics could use in the upcoming season- the type that will be a bench leader and a distributer for a bench with a couple of scoring options in Green and Terry. Fisher is your guy. Don't get me wrong, the thought of seeing Fisher in green makes me feel uncomfortable too. It's weird. I mean we're talking about Fisher here. But the pros do outweigh the cons in this one.

Fisher is someone that would come in and know his role already. He knows he's no longer a point guard in the NBA that can start for a contending team, and he knows that. But he's still someone that can eat quality minutes on the court without things going terribly wrong (while Rondo is on the bench). He's also proven that he's a leader everywhere he goes. Fisher hit big shots for the Thunder in the postseason and provided great leadership for the as they fought their way out of the Western Conference last season.

I'm not saying the Celtics won't succeed this season without Fisher. I'm saying the Celtics could only benefit from signing Fish. Fisher has hit so many big shots for the Lakers in the past. The taste of revenge would taste sweet if he were to sign with Boston, since the Lakers dumped him before the trading deadline last season. It would be a nice way for him to get back at his former club in the storied Celtics-Lakers rivalry.

And since there isn't a high demand for his services from any title contenders, signing with the Celtics could very well be his last chance to compete for an NBA title.