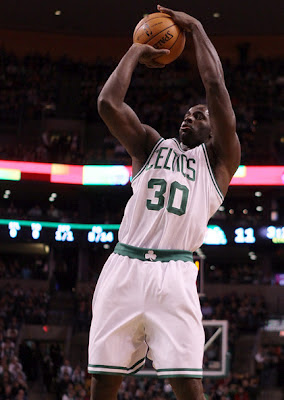 Brandon grew up in Baton Rouge, Louisiana and went to Capital High School, a prep school in Baton Rouge. He was one of the most sought-after recruits in the country his senior year. He went to Louisiana State and was the 33rd pick overall in the 2005 NBA Draft, drafted by the New Orleans/Oklahoma City Hornets. He originally declared for the draft after his freshman year in 2004 but ultimately withdrew his name and returned to college.

In 2007, Bass signed with the Dallas Mavericks where he got a lot more playing time than he did with the Hornets. After averaging less than 10 minutes a game in his first two seasons, he averaged nearly 20 minutes, 8 points and 4 rebounds a game in Dallas.

He signed with the Orlando Magic in 2009 but didn't have the same numbers as he did with the Mavericks. In 2011, the Magic traded Bass to Boston in exchange for Glen Davis. This past season for Bass has statistically been the best of his career. He averaged 12.5 points, and 6.2 rebounds a game for the Celtics.

Bass' offense last season was great in helping the Celtics' front court. Bass' ability to score in bunches is what made him an asset. He shot the ball well and played solid defense alongside Garnett. Without Bass, Celtics would of had a hard time moving Garnett to the center position because of  the lack of power forwards on the team. His inside/outside combination of scoring freed up Garnett on the offensive end and gave opponents a tough time predicting whether Bass was going to shoot or make his way in. This forced opposing centers to defend Garnett one-on-one, instead of double teaming him.

Bass is great pick-and-roll guy, a play that lead to a lot of points for Bass last season. He's proven to be a knock down shooter from inside the arc and can really get on roll once he gets going. And when he's making his way to the hoop, he can finish with authority. I predict Bass to average 14 points this season. I think with a full training camp with Doc and his teammates before the 82-game season, he'll be even better.