Rivers: 'We Could Really Use' Delfino 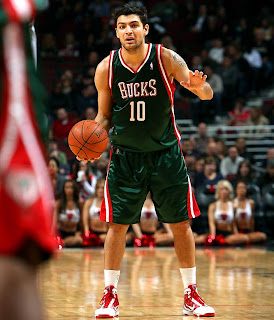 Rumors emerged a few weeks ago that the Celtics have expressed interest in signing free agent forward Carlos Delfino. Coach Doc Rivers spoke highly of Delfino, who spent the last three seasons with the Bucks and is currently playing for Argentina at the London Olympics but doesn't think the Celtics have enough money to lure the forward to come to Boston.


"We've looked and I wish we had the money to add him. We could really use him. They turned him into a shooter but he can give you much more" (Rivers on Delfino)

The most money the Celtics can offer him is the $1.96 bi-annual exception. Although it is rumored that the Bucks have expressed interest in signing Mickael Pietrus over Delfino, a handful of other teams will be offering Delfino more money than Boston. Unless he is willing to take a huge pay cut in order to play for a contender, it's high unlikely that he'll sign to the Celtics.

Delfino would be a great addition for the club because of his sharp shooting and one-on-one defense. He'd be a solid back up for Pierce and would solidify the bench, making it the best in the league (in my opinion).

Josue Pavon
Posted by Josue Pavon at 10:17 AM
Email ThisBlogThis!Share to TwitterShare to FacebookShare to Pinterest