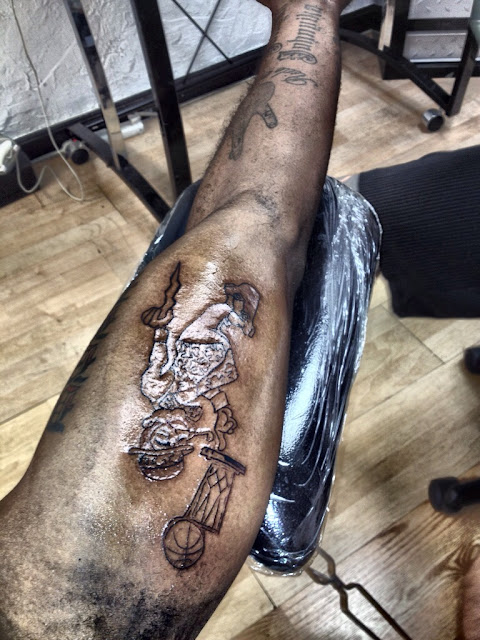 So if you haven't heard Jason Terry is a Boston Celtic. Looks like he's got plans to make it a life long commitment as he gets this tatted on his bicep.I love this for a few reasons.
A.) This tattoo is sick. Usually you just see the Shamrock or the Leprechaun. Terry gets the iconic Tommy Hienson look a like spinning the Larry O'Brien Trophy. Just a thing of beauty. Sully from Southie would be proud.
B.) Definitely not enough tattoos on this Celtics team since Delonte left. Paul, KG, Rondo aren't really tatted up. If there is one thing better than an NBA Superstar, its a sharpshooter of the bench with a bunch of questionable yet memorable tattoos.
C.) Jason's next tattoo... Hes going to ink his forehead with 'UMBUTU' and every time he hits a big shot flip up the headband for a quick glimpse.
D.) The set of balls this guy has to get this tatted is ridiculous. He signed with the C's only a month ago and is all ready getting it permanently marked on his bicep. This definitely gives you an idea of how confident not only Terry is but how smoothly he will fit right in with arguably the most prideful bunch in the NBA.
E.) Ray who???

Posted by SeanDutra at 9:33 PM
Email ThisBlogThis!Share to TwitterShare to FacebookShare to Pinterest