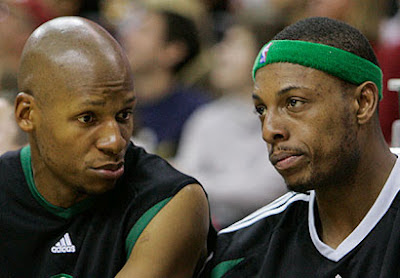 Paul Pierce's comments over the weekend made to Molly McGrath of Celtics.com on the C's offseason and his future with the team was very eye-opening. In the a summer that had Garnett re-signing, Bass, Terry and Lee signing for long term (3-4 years) contracts, it didn't make much sense for Pierce's to talk about the uncertainty of him retiring a Celtic. I expected a different kind of interview from The Truth.

When Pierce was asked about his long term future with the Celtics and the possibility of him testing the free agent waters, he answered:

I couldn't believe what I was hearing. Pierce has had a past of saying outlandish things and it had been a while since he has raised eyebrows so it was due, but about his future with Boston? It left me scratching my head. Then I read Gary Washburn's piece in the Sunday Boston Globe where Pierce responded to Allen's recent remarks about Pierce not recruiting him to come back to Boston over the summer: 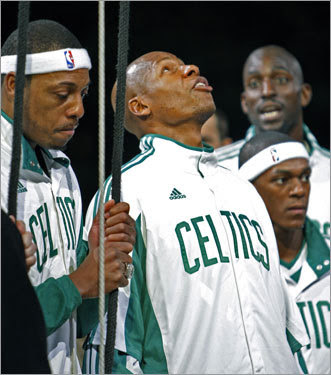 "I didn't really feel the need for that," Pierce said. "Ray's been here five years. Ain't like I don't know him and I'm trying to get him here. He knows everything that's going on. He knows what he wants. I don't think there's nothing I could have said or KG [Kevin Garnett], Doc [Rivers] or anybody could have said that could have changed his mind. I would love to have him back here. I thoughtit would have made our chances greater at getting to the Finals."

This is when things started to make more sense for me. I don't disagree with Pierce. Allen knew how much the Celtics wanted him. And at Pierce's age I don't think he needed to beg Allen to stay. The bond that they've had over the past five years should speak for itself. Allen surprised the basketball world when he made his choice to take his talents to South Beach. He knew the Celtics were getting the band back together and chose not to join.

Pierce also said he was still "bitter" about Allen leaving Boston but sounded like he understood why Allen left; he just didn't agree with it. And even if Paul did beg him to stay, would it have made a difference? I doubt it. Allen was ready to move on. He saw a new big 3 in Pierce, KG & Rondo that was ready to move forward with or without him.

It's plain and simple: Allen went to Miami because Boston wasn't stroking his ego. The team didn't tickle his fancy anymore. Even a classy player like Allen has a big ego, as he should. The best three point shooter of all-time had the right to decide if he wanted to leave. But is it because we didn't kiss his you know what? If so that's ridiculous.

So what if he didn't get the red carpet here like he did in Miami, or if he didn't have his teammates begging him to come back (besides KG) and he wasn't atop of the priority list (KG & Terry were both signed before he made a decision). Danny Ainge did what was best for the team. The team is the top priority, and that's the way it should be.

Now getting back to Pierce's quote about his future in Boston... Don't buy it. It's out of frustration. Pierce thought he was part of something really special when KG & Allen joined the team, and Allen to putting an end to the era really bothers him. I think this is his way of dealing with it.

Expect a different Paul Pierce once the season starts. Just as Doc put it best in his interview after Allen left, "The show goes on..."

Posted by Josue Pavon at 7:54 PM
Email ThisBlogThis!Share to TwitterShare to FacebookShare to Pinterest