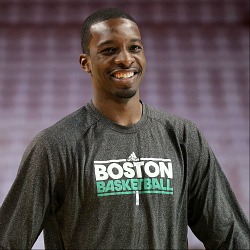 Writer Josh Zavadil of CelticsBlog caught up with Jeff Green to discuss the ups and downs of having to sit out last season and what lies ahead for the future:


"The surgery itself was probably the hardest thing I've ever been through in my life. I had to start from, basically, double scratch. Walking was an issue- just being able have the stamina was a problem. Everything just kind of shuts down. The nervous system breaks down, and it's kinda like a jump-start. You have to get it going and it was just difficult"


Green has spent the entire year in rehabilitation in order to return to the court. The forward spent these same months of rehabilitation last year hoping that the NBA would resolve their lockout. Once it was announced that the season would begin in late December, Green reported to training camp and couldn't wait for the season to get underway. But when he took his routine physical, doctors noticed something was wrong with Jeff's heart. Something very alarming.

"I didn't think anything was gonna happen. I thought it was going to be over in a matter of ten minutes and I would return to practice. The first couple hours were full of disappointment and feeling like I had let people down. With the lockout ending and finally being ready to play, I just felt like I let a lot of people down"


The hours that followed after hearing the news were probably the toughest for Jeff. So tough that he  admitted to not watching basketball for almost two months. In January, Green underwent surgery and was cleared to play. Green knows how high the expectation are in Boston and he cannot wait to get started.


Green, who was acquired in a controversial trade involving center, Kendrick Perkins, is eager to show that he can fit in with Doc's system. And I think he will. He's fought hard to make his comeback and will continue to fight hard throughout the season with his teammates in Boston. A city where there's only that one goal in mind.

Josue Pavon
Posted by Josue Pavon at 2:31 PM
Email ThisBlogThis!Share to TwitterShare to FacebookShare to Pinterest