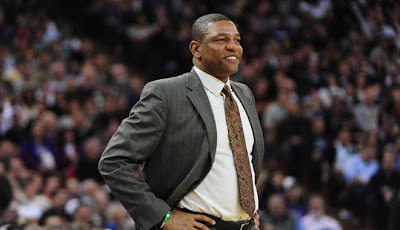 After a successful run in their year's Summer Olympic games, coach Mike Kzryzewski has decided to step down as head coach following this year's gold medal finish. Celtics' coach Doc Rivers is rumored to be the favorite to replace Coach K but has stated in the past that winning an NBA title is more important to him than winning a gold medal.

While commentating the Olympics, Rivers talked about how he wants to only have his focus on the Celtics. Ideally, Rivers is the best candidate for the job. He's built a reputation for himself as a coach that a lot of players in the league respect. If there's one coach who can handle egos of the NBA's elite, it's Doc Rivers. But I don't think he's that excited to coach the likes of Lebron James and company. It's not a challenge for Doc. But if he was offered the job, I think it would be tough for him to say no. He stated recently that he thinks Doug Collins would the best candidate.

Collins was on Team USA in 1972 when a controversial ending robbed USA in the gold medal game. USA refused to accept their silver medals due to the controversy and haven't accepted them to this day.

Doc could one day become the coach of Team USA, but not anytime soon. I think Doc enjoys the connection he has with his players and is so focused on his task of another NBA title that he doesn't want anything to come in a the way of that focus. The chase of another NBA title for the Celtics is the only thing keeping him around in the league and I don't see him stopping anytime soon. He's that committed.

Posted by Josue Pavon at 11:31 AM
Email ThisBlogThis!Share to TwitterShare to FacebookShare to Pinterest