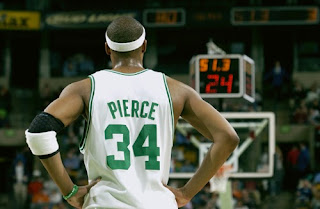 The day that has been looming over Celtics fans has finally arrived. After 15 amazing years Paul Pierce is no longer a Celtic.

Late last night the C's moved Pierce, Jason Terry, and Kevin Garnett to the Brooklyn Nets. In return the Celtics will get a package of good NBA players, including Marshon Brooks, Kris Humphries, Keith Bogans, Gerald Wallace and three first round picks in '14, '16, and '18. 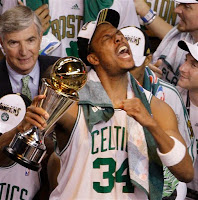 The return at this point is just more than I think the Celtics expected to receive back and you have to hand it to Danny, he got A TON in return for 3 aging players. I'm really excited about Marshon Brooks and those three first round picks.

On the other hand it is absolutely crushing to see the heart and soul of the Celtics leaving Boston. This is one of the days were you realize being a big fan of your local teams and players is a cruel trade. Business will trump loyalty every time.

Stay tuned here for wall to wall coverage on this trade and the rebuilding process that is under way in Boston.

Posted by SeanDutra at 7:48 AM
Email ThisBlogThis!Share to TwitterShare to FacebookShare to Pinterest