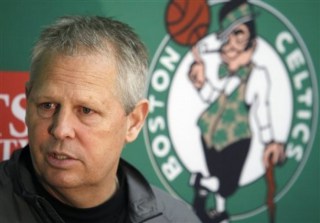 While admitting that he never thought it would happen, president of basketball operations Danny Ainge said in a press conference Tuesday afternoon that Doc Rivers chose to leave Boston to coach the Los Angeles Clippers.

After a week of speculation, the NBA officially approved the Clippers-Celtics deal Monday afternoon. Rivers will head to the Clippers while the Celtics receive a 2015 first-round draft pick. Rivers will sign a three-year, $21 million deal.

Ainge thanked his former coach for his service for the Celtics but expressed his disappointment about Rivers' decision to leave the Celtics.


"My feelings are: I had planned on Doc being our coach all along. We had discussions about him being a Gregg Popovich, a Jerry Sloan, a Red Auerbach - breaking Red Auerbach's all-time win record as a Celtic and being here for a long time - so I never really thought about this day until May 8," Ainge said.

On May 8, Ainge approached Rivers about coaching the Celtics next season  and Rivers asked Ainge what his options were. Weeks later, an uncertain Rivers expressed his interest in coaching the Clippers. 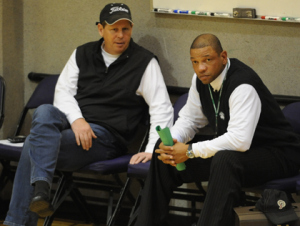 "Even then, it was so early after the season, I didn't think it was really going to happen until [Monday]," Ainge said. "We really never were close to a deal with the Clippers in spite of the reports, so I think that this is part of the business. I don't want to get too emotional. Doc's going to a great situation - a place he chose to go and a place he wants to be. It's not a place that I chose for him to go or a place that I want him to be."


Ainge is still uncertain about what will happen with Paul Pierce and Kevin Garnett, but the president of basketball operations commented on the possibility of a potential rebuild that could take place this summer.

Rivers stressed to Ainge that beyond the rebuilding as the main reason for his decision, he felt like the Celtics needed a change and hinted that he was starting to lose his grasp on the locker room with his players.


"Doc felt that a change would be good for our current players," said Ainge. "That maybe a new voice would be better."

Celtics organization have not started looking for a new coach, but when asked about the next Celtics coach Ainge indicated that coach Rivers is in fact 'replaceable.'