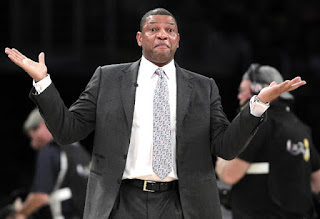 The Celtics and Clippers have reached a stalemate on a potential deal that would send Kevin Garnett along with the rights to hire coach Doc Rivers to Los Angeles in exchange for two first-round draft picks and center DeAndre Jordan.

According to reports, Celtics are interested in Clippers' guard Eric Bledsoe but Clippers do not want to let him go. And Danny Ainge won't pull the trigger on the deal without the young guard included.

Garnett reportedly is willing to waive his no-trade clause to play in Los Angeles only if he'll be reunited with Rivers. There has also been reports that if the Celtics decide to waive Paul Pierce before June 30, that he will also reunite with coach Rivers alongside Garnett. 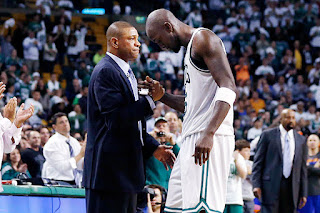 There's been speculation that the reason Clippers won't include Bledsoe in the trade for Garnett and Rivers is because they have plans to deal him elsewhere. But NBA executives said that a rumored sign-and-trade deal between Clippers and Lakers that would include Dwight Howard, Blake Griffin and Eric Bledsoe is not going to happen.

Experts believe that such a move for will help persuade free agent all-star guard, Chris Paul to stay in LA.

NBA executives also said that Danny Ainge told Rivers that talks had stalled between the two teams, and that Rivers said he was prepared to return to the Celtics. However, conflicting reports say that talks will resume shortly between both sides to see if a deal can be worked out.

It's clear that Rivers not only flirted with the idea of coaching the Clips; he gave them his consent. If Ainge decides to kill all trade talks and bring Rivers back for another season to coach the Celtics, will all be forgiven? Or has Doc and the Celtics reached the point of no return?