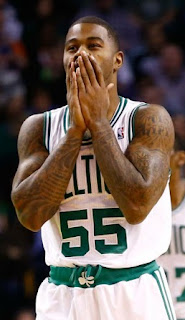 On the eve of free agency, Williams was guaranteed $200,000 from the Celtics if they didn't waive his contract before July 1. If Celtics waited until the start of the season to waive Williams, he would've been owed at least $950,000.

With the beginning of a rebuild looming over the Celtics this summer, Danny Ainge will do the best he can to create as much cap space as possible.

What also didn't help Williams' chances of staying with the team was that he was arrested this past May in Kent, Wash. for threatening the mother of his 10-year-old son with a gun shortly after the Celtics were eliminated from the playoffs.


Williams is being investigated for second-degree domestic assault, prosecutors are still investigating the incident that took place in a parking lot in front of Williams' 10-year-old son during a custody exchange. If convicted, Williams faces possible jail time.

Williams joined the Celtics as a backup point guard in February after playing basketball in China. He averaged 4.6 points, 1.8 rebounds, and 1.6 assists in 24 games for the Celtics.