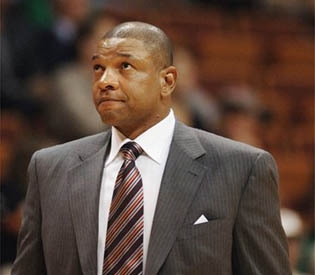 According to an NBA front office source along with other reporters around the NBA, Doc Rivers has given indications that he might be ready move on from coaching in Boston. When asked if he was planning on returning to Boston by the Boston Globe, Rivers responded by saying, "I rather not say."

ESPN's Chris Broussard reported earlier this week that Doc Rivers believes "it may be time for a change," according to a source close to the team. "Doc loves coaching," the source told ESPN. But there's a good chance he may be coaching elsewhere next season if the Celtics are willing to cut ties with veteran coach.


As the June 30 deadline quickly approaches, Ainge has to be leaning towards one side more than the other. Celtics have two weeks to decide if they want to bring Paul Pierce back for another season under $15 million, trade him or let him walk.

Ainge's decision on what to do with Pierce will ultimately determine Kevin Garnett and Rivers' fate in Boston. Garnett has hinted in the past that he hopes to retire a Celtic alongside Pierce and can't imagine not playing the rest of his career next to the future hall-of-famer, so it wouldn't be a surprise if Garnett decided to retire. 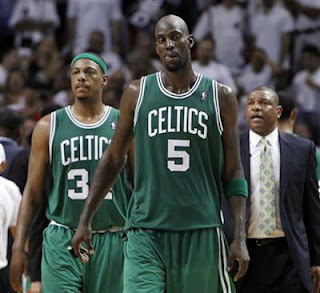 In the past, Doc has gone on record to say that he doesn't want to coach a rebuilding team again and that those days are behind him. We all know how much suffering he went through from 2004-2007, a stretch that included a 18-game losing streak, first-round playoff exits and lots of frustration for Doc.

If Doc is seriously considering stepping down as coach of the Celtics, one has to assume that Ainge is leaning towards letting Pierce walk one way or another and will take the first steps into rebuilding his team for next season. Why else would Doc consider leaving? Or at least deny these rumors?


Either way, Ainge isn't going to let Doc walk way without a fight. Rivers is still under contract for another three seasons in Boston, which gives Ainge the right to decline any interview offers that come in for Rivers. Boston Herald's Steve Bulpett reported late Thursday night that the Celtics have denied the Clippers permission to speak to Rivers about a coaching job.

For those Celtics fans out there hoping for one more run with Pierce and Garnett, one possible explanation for these rumors could be Rivers baiting Ainge to bring the band back together for one last final (seriously though, the very last) run.

It wouldn't shock Celtics Nation if Rivers actually does want to give it one final shot with his healthy point guard, Rajon Rondo alongside Pierce and Garnett. But if these reports are true and Doc is seriously considering walking out then it could be the biggest telling sign that Ainge is bringing the Big 3 Era to a close once and for all.