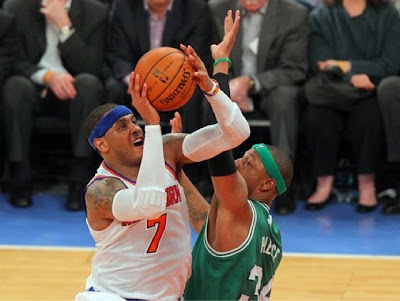 In what is starting to become an alarming post season trend for the Celtics, Boston muster only 23 second half points against the Knicks enroute to a 87-71 Game 2 loss for the Celtics.

The C's come back to the TD Garden with their tails between their legs looking at a 2-0 deficit in the face.

In Tuesday nights loss, the Celtics were truly outplayed in every facet of the game over the whole 48 minutes. They came out flat again in the second half not scoring for the first five minutes or so. This is after a first half that the Celtics looked overwhelmingly in control. Leading 48-42 at halftime the Celtics, were out scored 31 to 11 in the third quarter and the Knicks never looked back.

"They didn't let us throw a knockout punch and I thought in the second half they turned that on us and they threw a knock out punch. Several," said coach Doc Rivers after the game. 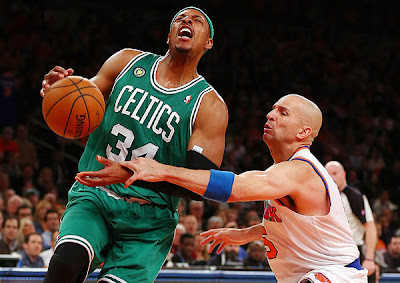 The Celtics return home with their backs really against the wall. They showed resiliency in the first half overcoming lights out shooting from J.R Smith, and countering that with 14 points from Jason Terry and Jordan Crawford off the bench in the first half. They also had a solid first half performance from Jeff Green and Paul Pierce.

However in the second half it was all New York. The Knicks came out of halftime on a 24-4 run. It was game over at that point.


The Celtics were able to momentarily get it back to a nine point deficit in the 4th quarter, but the Knicks and Carmelo Anthony quickly threw the final knockout punch of the game. Anthony scored eight straight points, on his way to a game high 34 to end the third and into the start of the fourth quarter.

The offense for the Celtics has really been brutal. It hurts more that they have been able to limit the Knicks to under 90 points in each of the two games. The Knicks haven't even gone off yet like some thought they would and the Celtics were unable to keep up.

The Celtics are back in Boston tonight to try and get back in the series. This is a huge make or break home stand for the Celtics if they have any chance of avoiding a disappointing first round exit.