Carmelo Anthony has been on an absolute tear to end the regular season. He brought that hot hand into Game 1 against the C's and put up 36 in the opening game of the post season. 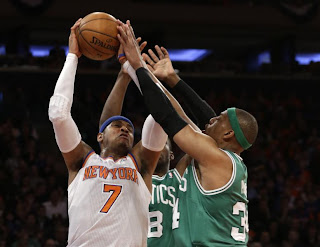 It's no secret that Anthony is a volume shooter, and against the Celtics in the regular season he was pretty a inefficient scorer. Melo has only shot 34% against the Celtics in the four meetings in the regular season, down from his 44% shooting on the year. He got his points but needed a bunch of shots to get there. This is due to a few things that Boston has been able to do to make it tough on Melo to get into his rhythm.

In the past, Paul Pierce has been the guy designated with the tough job of slowing down the Knicks Superstar . This year it looks like he is passing the bulk of the defensive responsibilty on Melo to Jeff Green.  Pierce and Green bring two different defensive styles to the table, and both match up well against Anthony. Pierce plays a physical, tough style of defense and uses his size and wits to his advantage, but may not be able to repeat it in a 7-game series. While Green uses his athleticism and speed to contain his defender and does a good job contesting jumpers.

Green matched up well against Anthony in Game 1. He seemed to accept the challenge of guarding a legitimate superstar. Anthony seemed frustrated when Green had him locked down and was constantly having to fight for position down on the block, when looking to set up an isolation situation. We saw some of Brandon Bass on him, and to give Bass credit he was very physical as well but could not stay with Melo's quickness.

Tonight, I would expect to see a lot of different looks. Green will need to repeat his defensive effort in Game 2, and the rest of the series.

As we know, Anthony is very skilled in scoring in a variety of ways, but the most important for Green and the C's to limit is his inside game. Melo was tentative driving in the first game, could be because Mr. Big Ticket himself is back there waiting. We'll see how that plays out in Game 2, this evening.

We all know the struggles the Celtics bench went through last year in the postseason. It was definitely a point of emphasis in the off season to beef up the bench production with the additions of former sixth man of the year Jason Terry, Courtney Lee, and the mid season pick up of Jordan Crawford. These three have to make a consistent impact on the game when they are called upon. 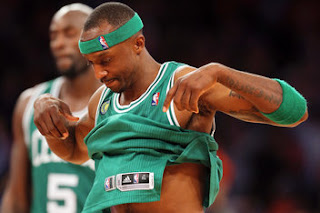 In Game 1 it was a flash back to last years ECF against the Heat. The Celtics got 4pts from their bench all from Courtney Lee. Terry was awful, Crawford was tentative, and they group was extremely disappointing. They need to turn it around if the Celtics will have any chance of winning the series. Also Chris Wilcox got a big DNP in the first game, he may be a key to game two playing some high energy minutes.

The Knicks bench is full of snipers between JR Smith, Steve Nowak, and Jason Kidd. They can heat up quickly, and that would be bad news for the Celtics. It's important that the C's neutralize the offense from New York's bench with some of their own.

Sealing off the 3-point line

The Knicks live and die by the three ball. They have attempted the most 3-pointers this season averaging nearly 29 per game.  The Celtics NEED to close out on the Knicks shooters and make them beat them driving to the hole. Avery Bradley and Courtney Lee will likely play a big role keeping J.R. Smith in check from deep, which is much easier said then done.
The  Celtics did a decent job of contesting the deep shooting by the Knicks in Game 1. New York shot only 9-25 from the 3-point stripe. That could have a lot to do with Steve Novak only playing five minutes...but we'll have to see if they unleash the 3-point shooting specialist later in the series.

It's no secret, the Celtics are not the youngest team in the league. They definitely lucked out in terms of the schedule for this potential seven game series. First off they only have to travel to New York, which is huge for this version of the Boston Celtics.  They have shown on numerous occasions any back to back travel days or long road trips affect this team negatively.

Also, the games are so spread out in the upcoming two week period.  They will have plenty of time to rest due to the lack of travel time and days off in between games. Kevin Garnett really benefited from being able to rest down the stretch, and the playoffs will be a grind, but the Celtics really couldn't have asked for a more favorable schedule and destination. They've had  since Saturday afternoon to rest up and get ready for Game 2, that's definitely in the Celtics favor.


Since Rondo has been out it has been a search for the next legitamate option for the Celtics to run their offense through. Pierce and Garnett will obviously get their touches even if they are cold, as we saw in Game 1. The C's need Jeff Green to fill that role as a 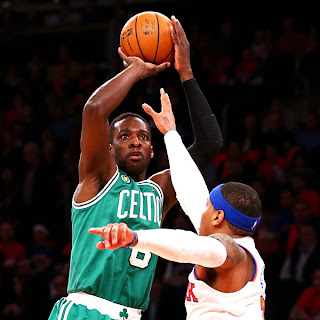 consistent scorer if the Celtics want to get past New York.

Jeff Green was the number one option on the offensive end in the first half, but disappeared in the 2nd. He has shown flashes over the season to go off but not consistently. Green is really the only other Celtic qualified to fit this particular role. He doesn't have to average 25 per game in the series, but the Celtics would greatly benefit from a solid consistent playoff performance from their up and coming forward.

So I know i said only five points, but here is a bonus one...

There you go, enjoy the game and the rest of the series!