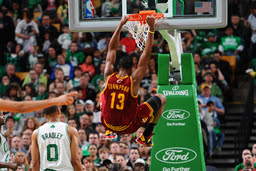 Tristan Thompson's career night led the Cavs to victory against the Celtics last night and snapped a ten-game losing streak.

Thompson had a career high 29 points and 17 rebounds against a depleted Celtics team, playing without Paul Pierce (sore ankle) and Kevin Garnett (foot).

Jeff Green scored 23 points and grabbed nine rebounds. Brandon Bass chipped in with 14 points. Celtics shot poorly in the second half, they went six for 22 in the third quarter and could never get it going in the fourth.


"We missed a lot of open shots, but I also thought we settled," Coach Rivers said. [ESPN Boston]

The Cavs outscored its opponent in the paint, 52-38.

But on the brightside: Shavlik Randolph had his best game as a Celtic. He chipped in with 16 points, seven rebounds off the bench. 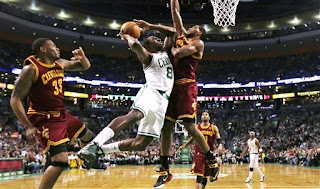 Despite clinching the playoffs two days ago, the Celtics have dropped eight of its last 11 games. Without Garnett and Pierce, they couldn't find enough offense against a very hungry Cavs team, coming off of a ten-game losing streak.

It's unfortunate that Jordan Crawford or Jason Terry couldn't give the spark they needed off the bench. Neither one of them scored in double digits.


Celtics next game will be Sunday when they host the Washington Wizards at TD Garden. Paul Pierce and Kevin Garnett are both listed as probable.

Avery Bradley left the game early after hurting his collar bone in the fourth quarter. He told reporters after the game: "It hurts, but I'll be fine." ... With Garnett and Pierce both looking like they will be playing this Sunday against the Wizards, this could potentially be the first look at the Celtics team we will see in the playoffs.
Posted by Josue Pavon at 6:54 AM
Email ThisBlogThis!Share to TwitterShare to FacebookShare to Pinterest
Labels: avery bradley, blog, boston, brandon bass, causeway street, cavaliers, celtics, cleveland, doc rivers, jason terry, jeff green, jordan crawford, kevin garnett, paul pierce, savlik randolph, tristan thompson