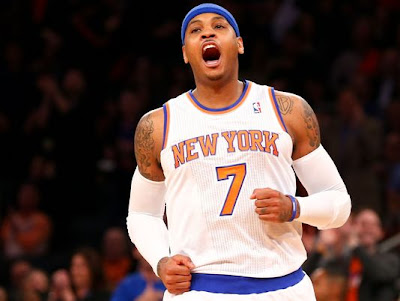 Carmelo Anthony scored 19 of his 36 points in the second half and put away the Celtics in game one of their best-of-seven series.

Celtics struggled offensively, scoring only 25 points in the second half and eight in the fourth quarter.

Jeff Green started off hot, he finished with 26 but scored just six points in the second half. Paul Pierce chipped in with 21 points to go with his seven assists and five rebounds but committed six turnovers.


"We had just some bad turnovers tonight," coach Rivers said. "If we had those turnovers in any game, we probably should lose the game and we did. We were making post passes from the other side of the floor. I mean, those are just not good passes." [Boston Globe]


Green and Pierce alone committed 12 of the 21 Celtics turnovers. 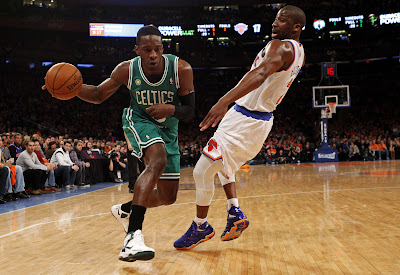 Despite its turnovers, the Celtics still had a 67-70 lead after three quarters. But then the fourth quarter started, where the Knicks forced nine (yes, nine) Celtics turnovers and only needed 18 points in the final 12 minutes to grab game one away from the Celtics.


"We were in great position to take over the game, to win the game," Green said. "Turnovers killed us. Offensive rebounds killed us." [New York Times]


Besides Anthony, the Knicks didn't get much offense from anyone else. J.R. Smith finished with 15 points and Raymond Felton scored 13 but most of that came in the first half. Two starters finished scoreless for New York.

It was too bad Kevin Garnett couldn't get his shot to fall throughout the game, he shot 4-for-12 and finished with eight points to go with his nine rebounds. While Doc searched for offense, Celtics' reserves went 0-for-7 from the field. Courtney Lee scored his four points from the free throw line, Terry and Crawford were scoreless.

The series continues Tuesday in New York where the Celtics will hope to tie things up before heading to Boston for game three.

Although Celtics had no business winning this game, they nearly pulled it off but had no answer for Melo. Defensively, the Celtics did a solid job on Anthony by making him dribble more than he should have but it's going to be hard to win any game in the playoffs without Garnett scoring in double digits or getting any help from the bench... Avery Bradley was impressive on both ends of the floor but needed help with point guard duties. Bradley couldn't make his cuts to the basket like he was doing in the first half because he was the ball handler for most of the second half. And his lazy lob passes into the hands of the Knicks defenders were driving me INSANE. Doc may want to consider giving Terrence Williams a few minutes off the bench so that players like Bradley, Terry and Lee aren't forced to be the play makers and can focus on scoring.