On a larger scale, last nights game against Minnesota was a glimpse into the future and life after the 'Big Three Era' is over. The likely rebuilding process after Garnett and Pierce hang it up suddenly looks extremely depressing, especially if Rondo is moved at any point over the next year or so.

Not saying that Danny Ainge will move the Celtics point guard if he doesnt have to, but it seems like when the Celtics can't rely on Pierce or Garnett to take over a game, this team scarily resembles a lottery team. There's nothing worse then sort of rebuilding, they have to commit one way or the other. Lets say 2014-15 comes around, Rondo is 30 and in the last year of his deal and Pierce and Garnett are in the rafters, it could be a valuable trade asset for Ainge to use. And if that's the case, a Jeff Green led squad is not going to be headed for Banner 18 (hopefully 19 at that point), and then its the five-year plan on building through the draft.

If the Celtics really want to make holding on to their veterans worth while, they need to take advantage of it this year. Any chance the Celtics have at making a run deep into the playoffs starts with avoiding the Heat in the first round. It may seem like there are meaningless games down the stretch here, but in reality, every game is huge.

The Celtics need to go 5-3 to close out the season. Even without KG and Pierce, they absolutely have to take advantage of the soft schedule and beat the Pistons, Cavs, Wizards, Magic, and Raptors.

(Breathe in... Breathe out...  Deep Breaths guys, we'll get through this. Here's where I try to spin this..)


The only way resting and not caring about seeding makes sense, and this is a stretch, but could dropping to the 8th seed be a brilliantly diabolical move by Doc Rivers? 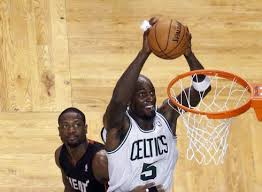 Is it possible, that Doc Rivers is of the mind to say he wants to play the Miami Heat in the first round? If Boston have any chance whatsoever to beat the Heat, it would be in the first round wouldn't it? Is that really as ludicrous?

Think about it, the playoffs are a grind, the Celtics are an aging team, they are resting their guys now. They won't be more fresh than in the first round. It's like going all in at the beginning of a poker tournament, when you know you have no chance of winning the longer it goes on.

The Heat obviously don't seem like they are all too worried about the Eastern Conference, and if the Celtics could some how come out blazing and land a knockout punch in Miami, it would go down as the biggest upset in NBA history.

If this is what the Celtics are doing, if Doc somehow developed this plan in the past few weeks, and it works, it could be the most genius, most diabolical plan to dethrone the Heat and then know, you are the favorite to come out of the East.

Wishful thinking, probably but seriously why not at this point.