Report: Celtics Trade talks for Danilo Gallinari with Denver could be 'revived'

The Celtics are looking to add a perimeter shooter at the small forward position, according to Steve Bulpett of the Boston Herald; the C's are interested in 6-foot-10 forward Danilo Gallinari.

Bulpett reported earlier this week that discussions between the Celtics and the Nuggets have ended but 'could be revived.' 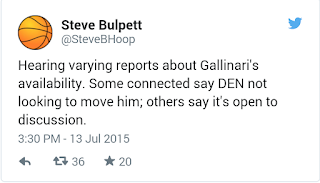 Gallinari would be a good fit for the Celtics. He's a three-point scorer from the wing, something that the Celtics have been missing. Along with his three-point shooting, Gallinari can also handle the ball and play the power forward position.

The Nuggets were reportedly shopping Gallinari before and during the draft, but when they couldn't find a deal they liked it seemed like Danilo was no longer available. But after inking small forward Wilson Chandler to a four-year deal, the Nuggets could be listening to offers for Gallinari.

Chandler, who was traded along with Gallinari from New York as a part of the Carmelo Anthony trade in 2011, is also good friends with Danilo. Not sure if that will play a role in the Nuggets' willingness to deal Gallinari but Denver will have to decide on what to do with the 28-year-old forward, who has one year left on his deal at $11.6 million.

Because of how well he played last season, the Nuggets may want to wait until next season's trading deadline to move Gallinari in order to get a better deal. After missing the 2013-14 season, Gallinari bounced back in 2015 after the all-star break, averaging 18.6 points, 4.8 rebounds and 1.3 steals.

Either way the Nuggets will most likely move Gallinari and if the Celtics can get the Nuggets back on the phone, they could strike a deal. Along with their future draft picks, the Celtics may have offered Kelly Olynyk, if I had to guess. Olynyk can shoot from the outside and offer the Nuggets size. But Denver was probably not that impressed. And in order to land Gallinari there needs to be more players involved.

After the Celtics couldn't land a first-tier free agent this summer, Danny Ainge, Celtics president of basketball operations, will continue to pursue players with expiring deals who can improve the Celtics roster. Low risk/high reward players with expiring contracts like David Lee and Danilo Gallinari will free cap space for the Celtics to pursue first-tier free agents next summer while also keeping the C's competitive in the Eastern Conference.