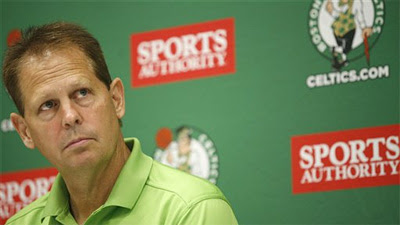 After what seemed like the busiest first day of NBA free-agency on Wednesday, when we saw the likes of Jimmy Butler, Kawhi Leonard, Danny Green, Kevin Love and even Paul Millsap agree to deals, the Celtics made their first move of the offseason (ready for this one?) by inking 10-year veteran Amir Johnson to a two-year contract, worth $24 million...(phewww what a relief).


Granted, the following signings for Danny Ainge were Jonas Jerebko (2-years, $10 million) and the deal of the day for C's fans; Jae Crowder (5-years, $35 million) were considered as a small victory on such a crazy day, but there were no fireworks for the green team on July 1.

After a mediocre, at best, NBA Draft night one week ago, where Ainge couldn't trade up or better yet no team wanted to feel bamboozled by the Celtics president of basketball operations, it was reported that several draft picks and roster players were offered for a chance to pick in the top-10. But it wasn't enough and not much has gone the C's way, so far.

Forget the fact that there aren't any reports or rumors of any potential signings anytime soon of key free agents, Ainge and company can't even get a meeting with anyone, let alone come to an agreement on a contract.

As I write this article, Greg Monroe (a Celtics target) and the Milwaukee Bucks have come to an agreement on a max contract of 3-years, $50 million. The Bucks, ladies and gentleman, the Bucks. A small market team that were 41-41 to the C's 40-42, not only lured the likes of Monroe to their squad, but they have also locked up Khris Middleton (another Ainge wish list player) to a 5-year, $70 million deal.

What the hell, Danny?

Pretty sure I heard that Monroe (16 PPG, 10.2 RPG) was looking to meet with the Celtics at some point within the next few days because he was 'interested' in what they had to offer, right?

Sorry to break it to you Celtics nation, besides cap room and a chance to be coached by Brad Stevens (finished fourth in COY voting), apparently Ainge doesn't have much else that appeals to this next generation of talent. To begin with, this current roster as is doesn't even have a legit point guard to feed any potential big-man.

So how do you make coming to Boston look attractive in 2015?

To be somewhat fair, taking a look at Ainge's track record so far since May of 2003, it's not exactly sexy in the least bit.

Here's some names you might of forgotten about over the past 10 plus years:


As you can see, besides Eddie House, James Posey and maybe Evan Turner (based on one good season, so far), Ainge and free agents have not panned out for the Celtics for the most part. In fact, going back even further to before the Ainge era began and the C's don't have much to discuss in that department as well, especially after the Larry Bird years:

Just to name a few, who were well past their prime, or never regained the 'it' factor they had prior to arriving to Boston.

This shouldn't be news for Celtics fans when it comes to lack of rebuilding through free agency, but it's a hard pill to swallow, nonetheless. In a sports town like Boston, the C's come up fourth on the list of relevance behind the Red Sox, Patriots and Bruins, so that's the main reason this issue isn't questioned more.

Just because it's a harsh reality, doesn't mean it can't be modified. Ainge should find a way to change the history of all-stars wanting to sign with the Celtics. Otherwise he should lose his job if he doesn't want to be held accountable. Besides the the trades of 2007 that brought Walter Ray and Kevin Garnett to Boston, and last year's (cap-space clearing) deals, everything else in between has been spotty at best.

I know it's still early in free agency this offseason, but the Celtics are in trouble if Amir Johnson is the best you could do on day one. The way I see it the "in Danny I trust" soap box is getting less crowded by the day. When does he stop making excuses and take action?

A league leading 17-time champion franchise deserves better, even if they've only raised one banner in nearly 30-years.