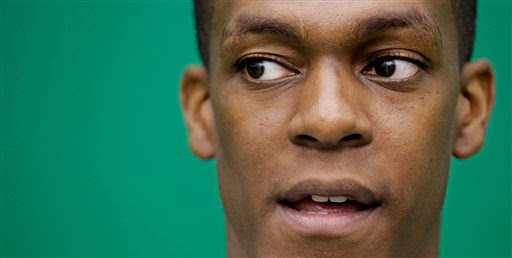 The Boston Celtics opened up their doors to the media last week, officially for the first time of the year. Celtics Media Day, usually a spectacle with reporters trying to figure out what future hall of famer to focus on, had a different feel this year. The room is full of fresh faces, including a new coach, Brad Stevens, that will signal the start of the Celtics new regime.

The Celtics in many ways are looking for a fresh start. Trading Pierce and Garnett, was the start of the dreaded rebuilding process, that so many C's fans are weary to buy into.  Yet there is one person that seems to be rejuvenated by the new beginnings, and that is Rajon Rondo.

Rondo, who will miss a good part of the season while still recovering from his Torn ACL , seemed in great spirits in his first press conference of the year.

"This is a fresh start for us, a new coach and a new team," said Rondo. "I'm excited about the fresh start. I'm excited every year, each team, but getting back on the court, I just want to compete. I haven't competed in a while and I'm a very competitive player and competitive person. I miss being out on the court with my teammates and having them there." 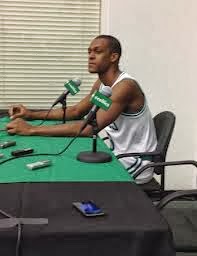 Seems a little shocking to see so much optimism from Rondo when the teams outlook is the bleakest since his rookie campaign. But there is one big difference that is clear, this year Rondo is the leader of this team no questions asked. Last season, there was a movement from Doc, Pierce and KG to convince everyone that would listen, that it was Rondos team, but lets face it that just was not the truth.

Rondo seems energized. Usually known for his quote less drabble he seemed in great spirits and genuinely excited for the year to begin.
The core is young, and Rondo now has no one to butt heads with. He know has a coach willing to work the offense around him and a young core that will follow his lead. From Rondo's point of view, he can't ask for a better situation.

Check that- he could if he was healthy....

Rondo did talk about his comeback, and where he is physically and mentally. He gave a vague time table for the Celtics to have their star point guard back on the floor.

"Probably sometime in the winter – maybe the fall" said Rondo. "It’s more mental when you come back, and you get around 10-11 months, it’s just feeling confident. You want to feel confident, especially the type of players and competitors we are. Our legs are pretty much everything; we use our speed.

Rondo will be relied along to bring the veteran leadership that the current roster lacks. He can do so in a limited way on the bench, but we should truly find the answer to the question that has been haunting Rajon his entire career. When he returns to the court this year, whenever that may be he will be able to answer the critics who ask: Can you build a championship team around Rajon Rondo?

Lets be honest there are no championship aspirations for the team as currently constituted, but Rondo's attitude in the past has come in to question. Now as the only bonafide superstar on the team he will get his first lick at being the true face of the franchise. He will do so with a new coach as well.

It was well publicized that the reported 'beef" between Rondo and Doc over the past years was straining on the coach-player relationship. At first glance, Rondo is extremely positive about the decision to hire Stevens as a coach. 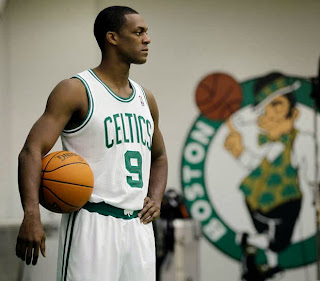 The biggest difference for Rondo going into this year is the team will be relying on him for any success. There is no longer the Big Three-- and Rondo. Danny Ainge has given him the keys and taken him off his learners permit.  Its going to be a tough few months while he is continuing his rehab, but when the time comes this team will only go forward with Rondo behind the wheel-- and he seems very enthused about that fact.