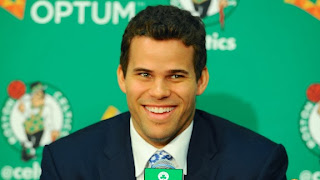 Kris Humphries has been working hard during the offseason in hopes of leading the Celtics in the upcoming season and for a number of years down the road.

According to an ESPN New York story, Humphries worked on skill development this summer with Phil Weber, a well-respected coach who has experience as an NBA assistant. Weber had this to say about Humphries:

"Kris had about as hard a working month as I've ever seen. He's in unbelievable shape," said Weber. "He just worked, worked, worked, and the last workout before he went back to Minnesota -- after about five weeks of hard work -- he made 15 (shots) in a row from the elbow and 10 in a row from the corner 3. Kris is transforming his game, and his belief level is starting to soar." [ESPN New York]

Humphries hitting jump shots is a good sign for Celtics fans. But hitting 10 and 15 shots in a row from different spots around the court sounds like something that almost every NBA player should be able to do. Not so impressive. 3 point shots? Somewhat impressive, I guess. But hey, he's trying and that's all we can ask for.

Playing for his sixth team in ten years, Humphries has struggled with finding a team he can commit to. He's been showing great leadership since being traded to Boston in June and is one of the oldest veterans on the roster.

Rookie guard Phil Pressey mentioned Humphries as one of the leaders in the locker room.


"Kris Humphries, Keith Bogans, they've been there almost everyday," said Pressey. "They've been helping out a lot. They've been in the league for 10-plus years, so I listen to everything they say." [Mass Live]

Although Humphries' future in Boston is uncertain, along with the other players involved in the Brooklyn trade, his business manager told ESPN New York that Humphries hopes to stay in Boston for more than just a season or two.


"He wants to get acclimated, he wants to get to know everyone, he wants to really prove to everyone 'Look, I'm here, I'm devoted, I'm ready to rock and roll,'" said Humphries' manager, Josh Ketroser. "That's where his head is at. He's looking to have a good year and would love to sign a three- or four-year deal and stay in Boston, and be part of them turning around." [ESPN New York]