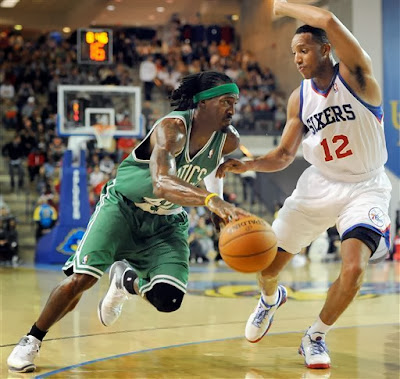 Celtics showed a lackluster effort in last night's 97-85 loss against the 76ers, continuing its winless streak in the preseason.
76ers led by more than 20 points in the first half and were in control throughout the entire game.

"We started the game off like we were too cool and were supposed to win the game," said Gerald Wallace. "They came out and hit us dead in the mouth."

Celtics cut a 14-point lead down to 5 in the fourth quarter but couldn't put together a run in the final minutes of the game.

Celtics struggled to defend Philadelphia in the paint and had a hard time getting back on defense when the 76ers ran its fast break.

Wallace expressed his frustration over the team's effort after the game.

"We played a Philadelphia team that isn't quite as good as New York," Wallace said. "If we continue to play like this, we're going to get embarassed every night. Teams like New York and Miami and guys like that who been together for a while, who've had guys to play together for a while, they're going to embarrass us every night and I'm not trying to get embarrassed. We have to figure out how we can do this as a team, bring everyone together, be on the same page and start building something."